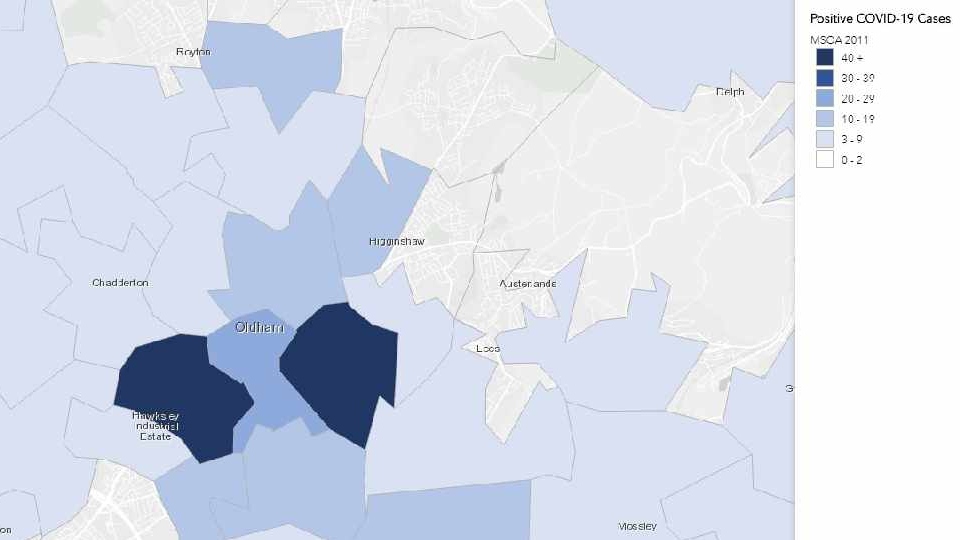 According to the latest figures, only Bolton has a higher infection rate in Greater Manchester than Oldham.

After weeks of plateaued Covid-19 levels, the borough has now risen back to nearly the top of the table with the second highest infection rate in Greater Manchester.

Only Bolton – where the government imposed further lockdown measures on September 8 – is higher, having been the first area of England to reach the grim milestone of 200 cases per 100,000 people.

Oldham’s infection rate now stands at 118.1 – higher than it was at the beginning of August when it was feared the government was about to plunge the borough into a full economic lockdown.

There have been 280 cases recorded by the government in the week to September 12.

And bosses say problems with access to tests are making the situation ‘even more challenging’.

Deputy council leader Arooj Shah said there was ‘carnage’ over the weekend after people found they were unable to book appointments – or get tested at walk-up centres – even if they were symptomatic.

And there were huge queues at the Southgate Street walk-up centre on Monday, September 14.

The latest government figures show that after a brief drop off in cases, Alexandra Park has returned as the borough’s biggest hotspot.

At 47 cases in the week to September 12, it is the neighbourhood with the second largest number of cases in the country, just below Kearsley and Stoneclough in Bolton with 51.

Werneth has also returned as an outlier for the borough with 42 cases, while Oldham Town South has emerged as a new frontrunner with 27 cases.

Katrina Stephens, Oldham’s director of public health said: “We have seen a rise once again in our number of positive cases which mirrors the situation across most of the rest of Greater Manchester, as well as significant parts of the north of England.”

But she said there was no one ‘significant factor’ that the latest rise could be attributed to.

“We continue to see a high number of cases which are the result of the virus spreading within households and families, but we also know that the virus is being transmitted in other settings where people come into close contact with each other,” Ms Stephens added.

“The current problems with access to testing is making this an even more challenging situation.

“We are discussing the issues with central government and are looking for solutions as soon as possible.”

She added they are urging people to ‘stay patient’ and only try and access testing they have symptoms, or have been advised to do so in response to an outbreak or cluster of cases.

Ms Stephens said: “For example getting a school child tested because they are currently off school but showing no symptoms will not get them back into school any quicker, as they still need to isolate for the required amount of time, regardless of whether they test negative.

“We are seeing cases of the virus in all age groups, but predominantly in children and people of working age.

“With cases continuing to increase we need to do all we can to prevent the virus spreading, and ensure that we do not see a return to the high number of people dying, or requiring hospital treatment as a result of Covid, that we saw earlier in the year.”

Social distancing, handwashing, wearing facemasks and following self-isolation guidelines are ‘essential measures’ that all residents must follow to stop the spread of the virus, she added.

Lime Side and Garden Suburb has the next highest number of cases, at 14, followed by Royton East and Cowlishaw with 12, and Oldham Town North  and Derker with 11 each.

Hathershaw has seen ten cases, and there have been nine in Alt.

In Failsworth South, and Chadderton Central there has both been eight cases recorded.

In Holt Lane End and Bardsley, and Chadderton South West there have been six cases apiece.

Busk, and Royton South East have both seen five cases.

In Diggle, Delph and Denshaw, Salem, and Royton South West, there have each been four cases while three have been recorded in Springhead and Grasscroft.