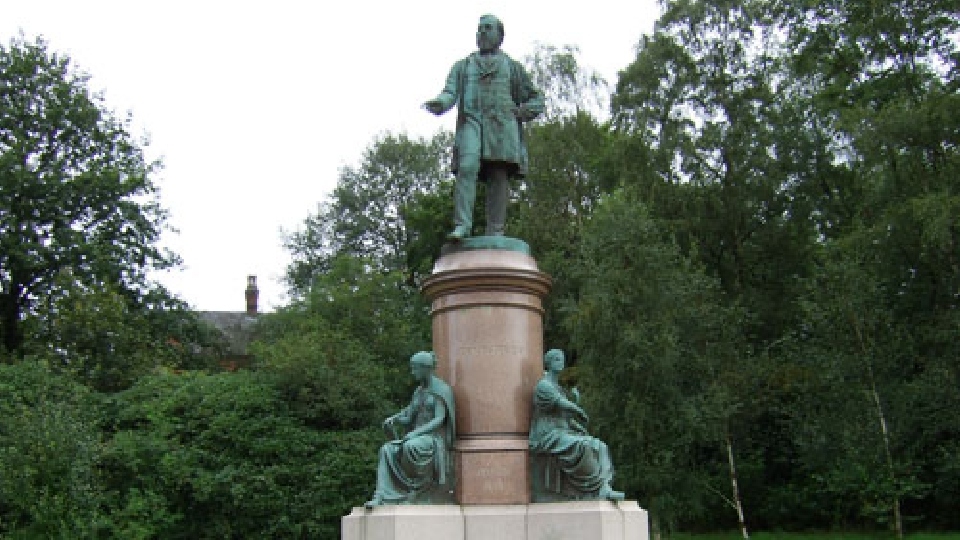 The statue of John Platt

A campaign to relocate a statue of a leading industrialist near to his former home in a Saddleworth village has been resisted by locals.

Backed by a leaflet drop, Saddleworth Parish Councillors Luke Lancaster and Max Woodvine urged people to support their move to find a site for the statue of John Platt, who was born in Dobcross in 1817.

He fought for the repeal of the corn laws and was boss of Platt Brothers, famed worldwide for manufacturing textile machinery.

A bronze statue to his memory, paid for by public subscription, was erected in 1878 near Oldham town hall, but it was moved to Alexandra Park in 1924 during redevelopment of the town centre.

The statue, with its circular pedestal, sits on a rectangular stone structured base flanked by four symbolic seated females representing Engineering, Manufacturing, Science and Art.

Cllr Lancaster said: “Max and I would like the statue in Dobcross, and we’ve received an encouraging volume of signatures from village residents at this stage.

"The statue has been moved once already, so theoretically there’s no reason why it couldn’t be once more.”

The duo suggested the village playing field off Dobcross New Road as a possible site for the statue, but dozens of posts on social medía rejected the idea.

One post, echoing the feeling of others, said: “Keep it where it is, not worth spending the money to get it moved.”

Another commented: “Money better spent on repairing damaged footpaths/bridges in Saddleworth that still haven’t been repaired as there is no money.”

And in a sideswipe, one declared: “It speaks volumes about the mindset... in the middle of a global pandemic we are spending time and money to promote such nonsense.

“Nobody cares about that statue, people care about health, money, wellbeing, their kids, safety, crime.

"Moving a statue? What a complete embarrassment.”

And one irate local added: “It's a crazy idea to consider putting the statue in the village playground.

"It could easily be vandalised. Besides, people would be hanging washing on it!”

However, Cllr Lancaster added: “We  intend to keep plugging for signatures, but it’s hard when the situation doesn’t permit doorstep conversations and so that will make the campaign a longer slog than may have otherwise been expected.”