You are Here: Home » News » Main News » The eight Oldham sites in the green belt to be developed under GMSF 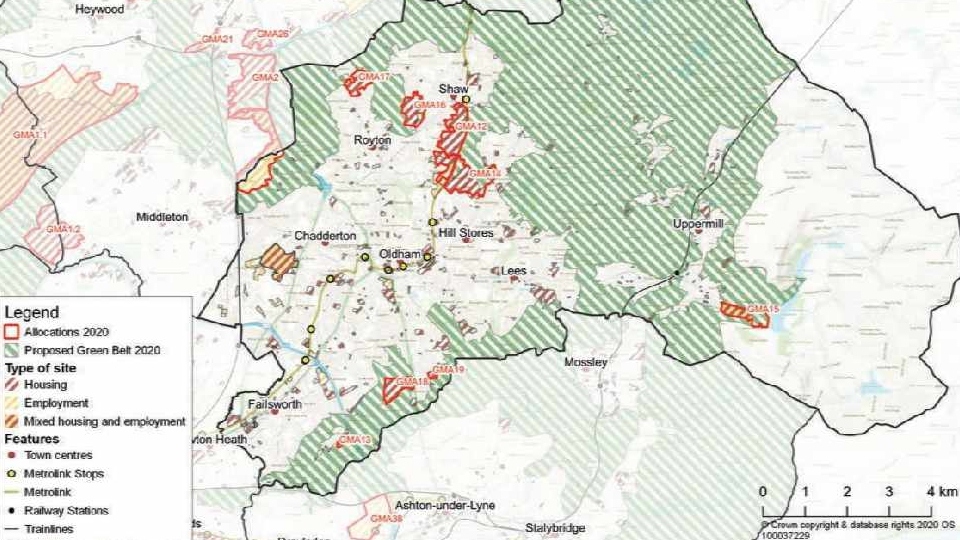 The latest plan for Oldham under the GMSF

These are the eight sites in Oldham’s green belt that will be developed by 2037 under the region’s housebuilding masterplan.

The latest draft of the Greater Manchester Spatial Framework (GMSF) is due to be discussed by leaders at a meeting of the combined authority today (Friday).

It is broadly similar to the blueprint published in 2019, but there have been changes to several sites in Oldham – with a number of green belt sites removed or scaled down.

One of the larger sites – 600 homes proposed for land at Thornham Old Road, to the north west of Royton – has been ditched from the 2020 version of the plan.

A development at Woodhouses has also been significantly reduced down from 260 homes to 30 houses, contained to one brownfield site at Bottom Field Farm.

And 50 homes proposed for a site at Spinners Way/Alderney Farm to the south east of Ripponden Road have been scrapped.

Plans for 518 homes and 180,000 sqm employment land at Kingsway South have also been put on the backburner with it being changed to a ‘broad location’, proposed for development after 2037.

Until then it will remain in the green belt.

Bosses were keen to highlight that there will be 1,400 fewer homes built on protected land in the borough thanks to the council prioritising development in the town centre and brownfield land, and drawing up a strategy to use its mill heritage for homes

However, the latest GMSF still sees up to 3,174 homes and 141,720 sqm for employment proposed to be built in the green belt.

These are the sites due to be developed over the next 17 years:

The plans for this site remained unchanged from 2019, where it underwent a rethink and reduced the number of homes significantly down from 900 originally proposed in 2016.

The aim is to feature a range of high quality housing – including for families – and make provision for affordable homes, while a new spine road would allow for a link to Shaw town centre.

The road would also link into the proposed Broadbent Moss allocation, which is also still included in the GMSF.

Sites of biological importance, including at Shawside and the Twingates local nature reserve would be retained and enhanced under the plans.

New access would be created from Meek Street or Moss Lane to the south, and Oldham Road to the north of Newbank House.

Pedestrian and cycling links would be improved to the Shaw Metrolink stop, and to the new Metrolink stop proposed as part of the Broadbent Moss strategic allocation.

There would also be investment in creating more recreation spaces to serve the new developments, which includes the expansion of and improvement to existing facilities at Heyside Cricket Club.

This allocation has been greatly reduced from the 2019 draft, down from 260 homes on three parcels of land, to just 30 on one site.

The site is brownfield land which sits within the green belt.

The new plans would see it deliver a range of house types and sizes to deliver ‘inclusive neighbourhoods’, including a mix of high quality family housing and affordable homes.

Public rights of way would be maintained throughout the site.

The GMSF document states that any development on the site would need to provide new or an improvement to existing open space, sport and recreation facilities.

This huge development remains in the same format as it was proposed last year, with half the amount of employment space originally put forward, but almost 50pc more homes.

Previously nearly 50,000 square metres had been allocated for employment on the site, with just 1,000 new dwellings.

But in the latest rewrite 1,450 new homes would be built, which would include family homes and an unspecified number of designated ‘affordable’ housing.

However, the latest plan says it’s estimated that around 500 homes won’t be built until after 2037, meaning that around 874 homes will be delivered during the period of the GMSF.

Oldham council has already granted approval for 77 homes to be built at land off Hebron Street which is part of the site.

Bosses say a large proportion of the site is proposed to remain undeveloped and will be retained as green belt, providing an opportunity to significantly enhance the ‘green infrastructure’ and biodiversity value of the site.

The nearby Higginshaw business area would be expanded with around 21,720 sqm of new employment space.

Public transport connectivity would be provided through a new tram link, which would serve both the Broadbent Moss development and new housing in the Beal Valley.

This could also include a park and ride facility.

The main points of access to the site will be from Vulcan Street and the new connections to Shaw and Oldham via the Beal Valley allocation, linking to a new internal spine road.

There would be provision for a ‘wetland catchment area’ in the northern central part of the site, to the south of Cop Road to reduce flooding risk.

Originally earmarked for holiday homes and more luxury housing in the 2016 draft, now this site is being mooted as a way to capitalise on its proximity to the tourist attraction of Dovestone Reservoir.

This redundant paper mill – which sits near to Peak District National Park – is being put forward for a mix of ‘commercial, leisure and retail facilities to support tourism’.

These would include shops and cafes, while around 2,500 square metres employment floorspace would be delivered at Waterside Mill.

A ‘modest expansion’ of 10 to 15 holiday lodges would be focused around the mill pond, and a ‘boutique hotel’ could also be provided.

And a visitor education centre could be provided in partnership with the RSPB and United Utilities.

Opportunities for the sustainable re-use and enhancement of Greenfield House, including its setting, should be explored, the document states.

There would be 170 homes with a mix of ‘low density’ and ‘executive’ homes for families, plus affordable homes of two or three beds.

An area of the green belt in the eastern half of the site would be retained to maintain a separation between the development and Dovestone Reservoir.

A new access point would be created off the A669/A635, including a new bridge.

Although these plans have been scaled back from 2016 – with 180 fewer homes proposed – it is still a highly contentious site for green belt campaigners.

The site is classed as ‘other protected open land’ (OPOL) which does not have as much protection of green belt but is much loved among residents.

Main access would be provided from Cocker Mill Lane, with emergency links onto Kings Road.

The Cowlishaw Ponds, a site of biological importance, would be retained and enhanced under the plans.

And any development would be required to enhance links from the site to the existing bus network.

This green belt site near Royton had originally been included in the first spatial framework with a much higher allocation of 600 homes.

This was revised down to 260 last year, and remains the same in the latest draft.

Alongside the new homes a new access point would be created off Castleton Road, near the junction of Garden Terrace, forming a spine road through the site.

Any scheme would need to enhance the links to Rochdale Road, and not place ‘undue pressure’ on existing social infrastructure.

This allocation has slightly reduced from the 2019 version, and is now only envisioned for one site south on land south of Coal Pit Lane.

Affordable housing will be delivered on the site, with access potentially being provided from Coal Pit Lane and Ashton Road.

Bosses say they hope to provide a range of house types, and sizes which will meet local need and foster ‘inclusivity’ in the new neighbourhood.

A new proposal that was not included in the 2016 framework, it remains in the 2020 version and would see 60 new homes built on farmland to the south eastern edge of Hathershaw.

The main access point to the site will be through the neighbouring former Centre for Professional Development site and onto Rosary Road, with the potential for a secondary emergency only access from St Cuthbert’s Fold.

Bankfield Clough, a site of biological importance would be retained and enhanced under the plans, and there would be a buffer between this area and the new development.