You are Here: Home » News » Main News » Hundreds of local children received gifts thanks to the Salvation Army present appeal 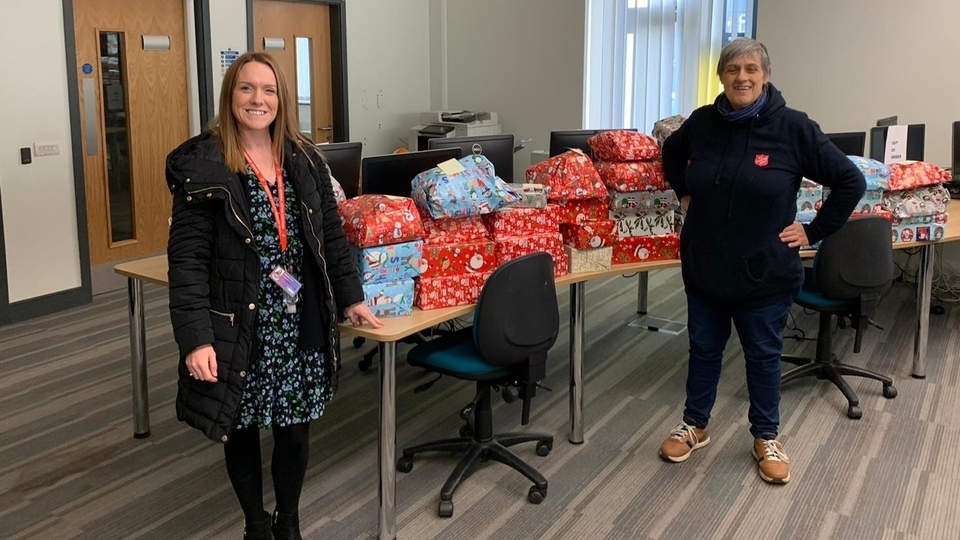 Teaming up with community group Reel CIC, corps officer Major Estelle Blake, community workers Graham and Kim Rogers, and their volunteers ensured families were helped to celebrate Christmas in an area that has been particularly hard hit by the pandemic.

Determined to spread festive joy, as well as handing out gifts to struggling families, they hosted a Covid-secure Santa’s Grotto at the café and community hub The Brew, which was visited by 200 children.

They also worked closely with housing association For Housing and community groups to provide 140 food packs, 200 craft packs, 80 toiletry packs and clothing for those in need on a housing estate with a high proportion of children on free school meals.

Gifts and toiletries were donated by businesses, community groups and schools, including Medlock Valley Primary School.

Major Estelle said: “We were absolutely overwhelmed by the messages we received saying thanks.

"Parents were in tears.

"They told us without this help they don’t know what they would have done.

“I’ve seen a woman with her own struggles take joy in seeing a photo of the gifts she donated.

"I’ve watched a young man volunteer and help us unload 30 real Christmas trees and then they’ve been given out to families.

"I’ve had parents cry with gratitude as we’ve shared a packet of crayons and colouring books.

“People have been incredibly generous with their donations and their time.

"We had one busy single mum who said she couldn’t do much, but then wrapped 72 selection boxes!

"She enjoyed it because she was part of something.

"Another from a local business collected money that would have been spent on a work Christmas meal for our present appeal.”

Community worker Kim Rogers and volunteer Jorena Oliver were also honoured with ‘Be Proud’ awards from For Housing for the work they have done during a difficult year.

The work over Christmas is an extension of what they have done throughout the pandemic, including, singing and dancing outside people’s houses as a way of reaching out to the elderly and isolated.

They contacted 300 people who are shielding and gave out about 500 to 600 wellbeing packs with craft activities, chocolate and puzzles.

And for Major Estelle, the biblical message of ‘Love thy neighbour’ is the driving force.

She added: “It’s the whole reason. It’s about loving your neighbour and reaching out.

"That’s what The Salvation Army is here for.”