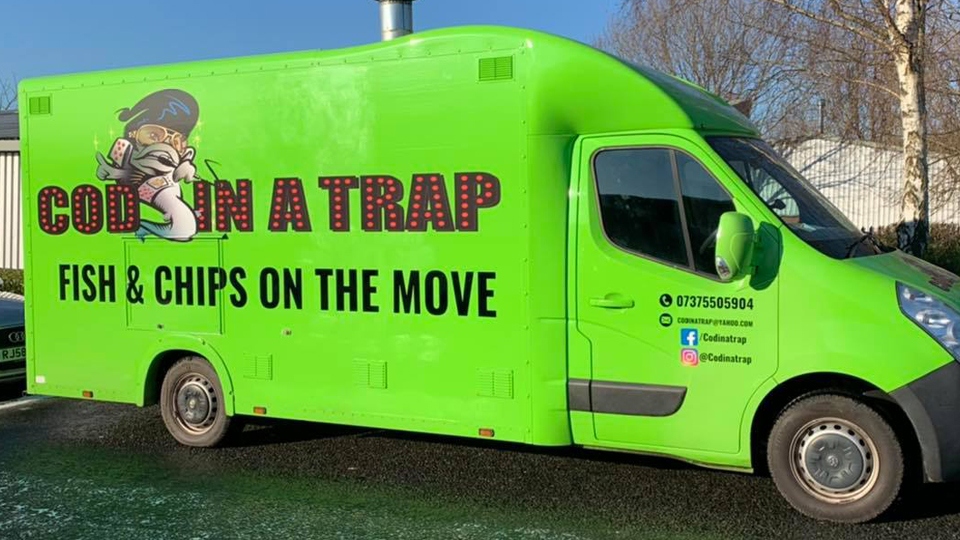 Cod In A Trap is ready to roll

An Elvis impersonator from Oldham is launching the only Elvis-inspired mobile fish & chip van in the UK.

It's been an idea in the making for some time for Lee Newsome, who lives in Copter Hill with his wife Donna, a former hairdresser.

The mobile chippy, called "Cod In A Trap" (geddit?), almost never happened, as Lee's original plan was to move to Spain and perform his Elvis tribute act to tourists.

"We moved out to Spain so I could do my Elvis tribute show full time," Lee, 48, told the Chronicle.  "But we had only been there 4 weeks when Covid-19 struck & we were locked down for months."

"In August we made the decision to try and sell up and come back home as we had zero income.   I started to think what we could do on our return, and as my background has been in the catering industry I started to look at fish and chips, a great British favourite."

After doing some research, he located a mobile catering van in Gateshead.  The next move was to break the news to his wife.

"Donna thought I was crazy," says Lee, a former UK Elvis tribute champion.  "She just looked at me as if to say 'this is another of your harebrained schemes'.  But she's fully on board with the idea, and we can't wait to get started."

Lee decided on an Elvis-themed van, inspired by the Kirsty McColl song "There's A Guy Works Down The Chip Shop Swears He's Elvis.

"After spending so much time as an Elvis tribute act, it seemed almost natural to mix Elvis with our new venture."

"I racked my brain trying to think of a great name, and then it came to me.  The first line in the song 'Suspicious Minds'.  I adapted it slightly, and 'Cod In A Trap' was born!"

Lee's brother-in-law, Carl Pugh, came up with the design for the van, which is based on the style of Elvis' billing when he played at top venues across the US.  Lee's van was then branded by Signbox in Oldham.

Now, the business is ready to launch, and Lee is both excited and daunted.

"We've put everything we have into this business, and it needs to succeed. Luckily, we sold our villa in Spain, and that's enabled us to cover our start-up costs."

Lee and Donna - who once cut the hair of celebrities like Ultravox and Take That in the 80s and 90s - are now just waiting for their Traders Licence from Oldham Council.

"We've already got a few spots in mind around Oldham, and want to expand into corporate work when things become safer. The King and the van will be available for staff appreciation and corporate days, so if you want to treat your staff to a fantastic lunch, then please get in touch. We are available nationwide."

You can contact Lee at codinatrap@yahoo.com or on 07375 505904.  You could also swing your hips along to the Facebook site.