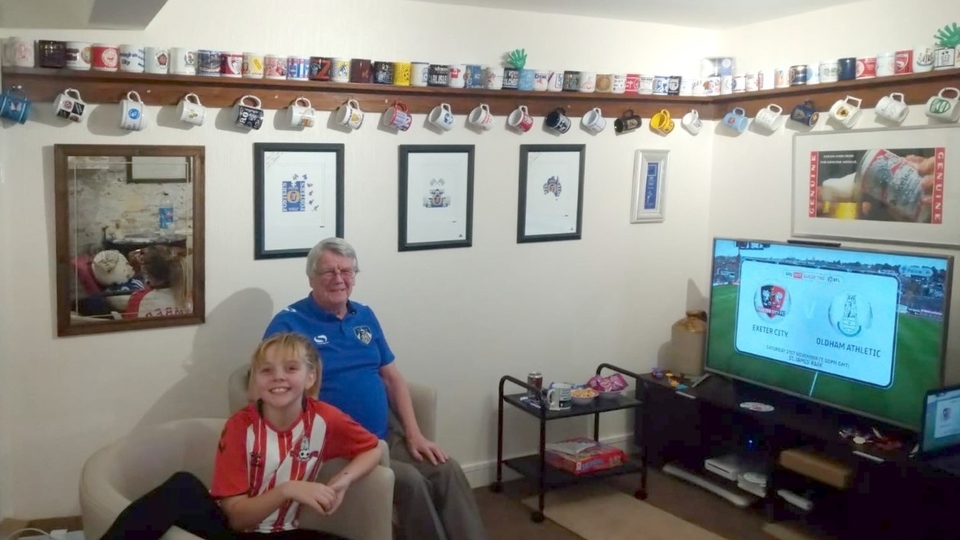 David and his granddaughter Amber - ready for the kick off

A family of season ticket holders have been singing the praises of Oldham Athletic, who are providing free access to the EFL iFollow streaming platform for all home League Two matches.

Life-long supporter David Needham says the club’s decision to reward season ticket holders is appreciated by the fans and this, together with the team’s recent improved performances, has helped to lift his family’s lockdown blues.

David, from Austerlands, has followed the club since 1953 when the team won promotion to the second division by winning the Third Division (North) Championship, under manager George Hardwick, a former England International.

And David is a proud life member of footballs’ exclusive Ninety-Two Club having attended a first team game, over the years, at all 92 Football league grounds in the country.

This was achieved mainly following Oldham Athletic as they moved up and down the divisions, and on his way he has bought a souvenir mug at every single stadium.

The mugs are all housed in a “man cave” at his Austerlands home, which is a shrine to Latics.

His family have gathered on match days to watch the live streaming service during lockdown.

David said: “It’s disappointing not being able to attend any live football matches, but we have tried to create a bit of a match-day routine at home, with Bovril served before the match and the customary pie at half-time.

“The set-up in the man cave also allows us to listen to the late Bobby Ball singing Boys in Blue or to hear Stuart Pyke’s iconic commentary on Athletic’s dramatic victory over Sheffield Wednesday to win the 1990/91 Second Division championship.

“Watching the team on TV has enabled us to get to know the new players and to assess their strengths, weaknesses and style of play.

"We certainly applaud the club's decision to provide this service free of charge.

“Our family hold four season tickets, including granddaughter Amber, and are true supporters, following the Latics through thick and thin times.

“We just can’t wait to get back to watching the team from our usual seats at Boundary Park - hopefully this will be soon.”