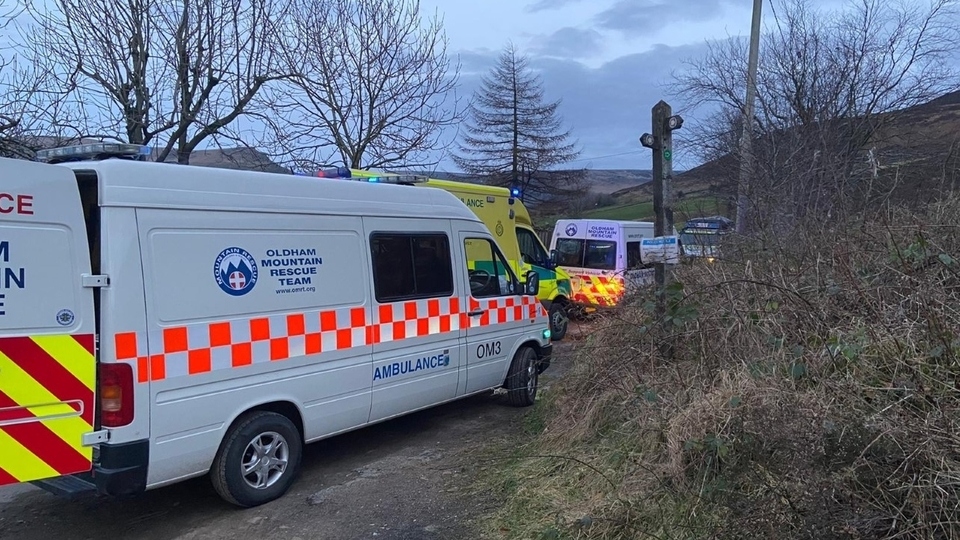 Members of the Oldham Mountain Rescue Team at the scene

Oldham’s héroes of the hills were involved in a dramatic rescue after a man received serious injuries in a firework incident.

In failing light and bitterly cold conditions, 22 members of the Oldham Mountain Rescue Team scoured hills near Dovestone after an appeal for assistance in locating the man from North West Ambulance Service late yesterday afternoon (Sunday).

Said a OMRT spokesperson: “After initially being unable to make contact with the casualty or the person who made the 999 call, the team headed in the direction of their estimated whereabouts, ready to send search parties along the nearby paths in order to find them.

“As we were deploying to this area, the callout officer managed to make contact with the informant and used local knowledge to determine the casualty was being helped off the hill in the direction of Greenfield by a couple of passers by.

“Given the seriousness of his injuries, the cold, and the failing light, this was absolutely the correct decision on this occasion.

“With this new information our team vehicles were able to relocate to rendezvous with the casualty as they reached the road.

“Medical aid for serious burns was administered by our team doctor, before transferring to the NWAS ambulance for onward transport to hospital.”

The spokesperson added although the team are not fully certain of the details, “we believe the male had an old firework he 'found' in his garage and decided to dispose of it near Indian's Head.

“It then prematurely exploded, resulting in very serious injuries to his hands, legs, face and eyes.”

The spokesperson added: “If you have any fireworks or pyrotechnics to be disposed of, please follow the advice of your local fire service and do so responsibly.

“We wish the casualty a full and speedy recovery, and  offer our sincere thanks to the passers by who helped the male and his companion to safety.”

OMRT personnel were involved for one hour and 45 minutes.