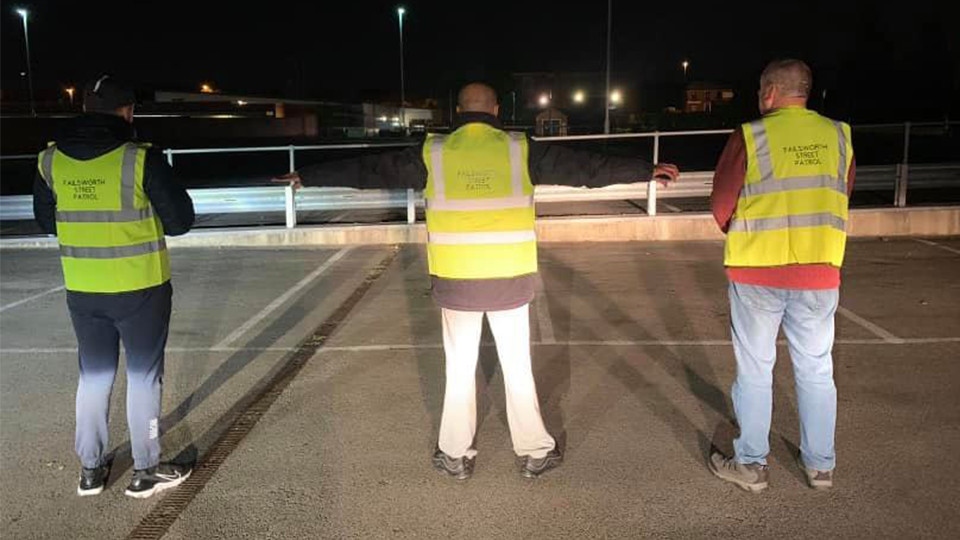 Some of Failsworth's community street patrollers, who did not want to be identified

A group set up by volunteers to deter crime in Failsworth has had support from Greater Manchester Police withdrawn.

Failsworth Street Patrol was formed last September, after concerns about rising levels of crime in the area.

But after initially working with the group, GMP have now withdrawn their support following incidents in which the patrols have "strayed into potential incidents of vigilantism".

The police have highlighted reports of members of the public being followed and confronted, including a moped rider who left feeling distressed and threatened after being approached.

A spokesman for GMP said: "Incidents such as these - particularly given their infringement of Covid restrictions - hinder police response, and can create tensions in the community the groups are seeking to protect.

The group were previously warned that their work had strayed into vigilantism, but there have been further concerning incidents where they have placed themselves and others at risk."

Police say the group have been previously warned that their work had "strayed into vigilantism", but there have been  further concerning incidents where they have placed themselves and others at risk.

"While we're grateful for their co-operation we have recently become aware of instances where their passion to help their community has strayed into potential incidents of vigilantism, including where members drove in an unsafe manner to obtain vehicle details of a car they suspected of being involved in a burglary.

"The group is not a formally recognised registered group or charity and activity that strays into the realm of vigilantism is not supported by Greater Manchester Police."

In a Facebook post, the group say the police and the council have asked them to shut down.

"They have distanced themselves from us once again, throwing vigilantism at us as you can see in their post. We have done everything we can for them to be on our side. We’ve got public liability insurance and we are actively in the process of getting our members DBS checked. We will continue to patrol the streets of Failsworth, as long as we have the residents on our side supporting us that’s all we need!"

The group's post received support online, including from Lizzee who posted "What a joke, when you ring GMP all you get is there is no one in your area,  we are busy. I fully support This group helping with crime in my area."

Another poster added: "Mustn't like the competition as they were doing a better job. Watch the crime rate shoot right back up. Still! It's not the police fault it's the government and the bloody cutbacks."

Whilst a third posted: "You guys have done a amazing job . There should be more groups like you"

Paul - who helped set up the group last year - told the Chronicle that the patrols aim to deter crime: "We're not vigilantes, we're a bunch of volunteers who just want to make the community a lot better for everybody.

"We're not a police force, we're not the council or anything like that."

It's understood the patrols are continuing in Failsworth, despite the withdrawal of police support.