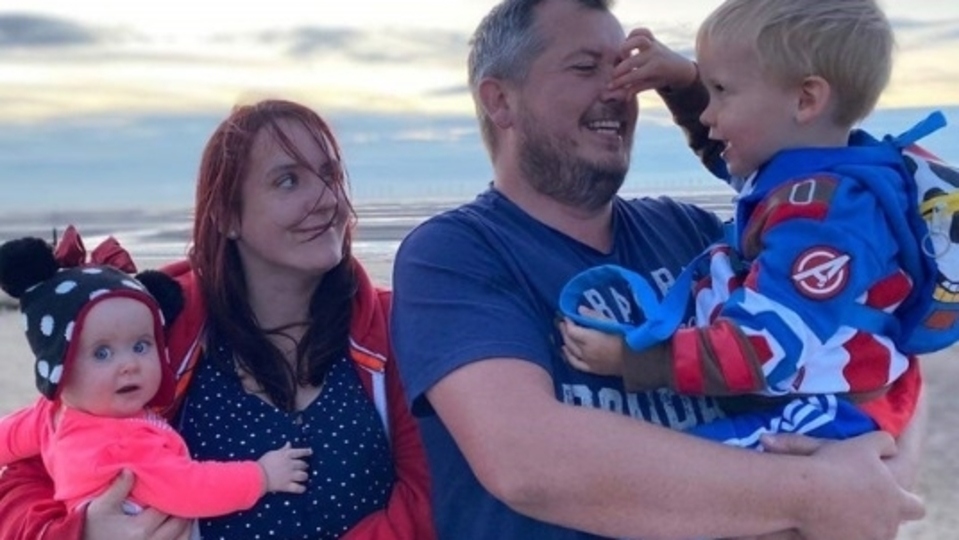 Graham Rogers and his wife Kim, and their young children

A Salvation Army support group is helping new dads in Oldham build confidence and find friendship during the pandemic.

Graham, who is trained in baby massage, started running community sessions and classes as a way of encouraging fathers to open up, and chat about their mental health, as well as giving their children somewhere to play.

When lockdown kicked in the sessions, run in Fitton Hill, moved online and have proved popular with up to 10 dads joining each time.

Graham, 39, who has three children aged 19, two and one, said: “The idea was to have a group where dads could come and do something with their kids like play games, baby boogie or baby massage.

"I wanted to get the message out there that it’s okay for men to do these classes as well.

“It’s about giving people the confidence to get through the door, then open up and talk to each other.

"It’s not a ‘men only’ space, just somewhere that dads can feel relaxed.

"They are involved in coming up with ideas too so we can help build their confidence.

“It really took off during lockdown.

"I set up a Facebook group, we did zoom meet ups and online baby massage classes.

"When restrictions lifted, we were able to meet up at our community hub, The Brew, and went on walks with the kids.

“We also met up without the children.

"One night we did a dungeons and dragons night, which was good to let off steam!”

Graham said he has noticed the dads are starting to chat more, as well getting joy from seeing their kids interact.

He said: “They told me what they are struggling with is doing stuff with the kids.

"Some are first time dads and feel like they are missing out on things like baby groups or going swimming.

“On the zoom calls we put the cameras on and take mute off so the kids can talk to each other.

"The dads love that because some of the little ones haven’t seen anyone else apart from the parents.

"You could see the pleasure in the dad’s faces, that they’ve been able to do that for their little one.

“I think what we are doing is hopefully giving them some kind of drive and a purpose.

"When I was a new dad, I didn’t have a clue what I was doing and I assume the majority of dads are the same.

"Having this support network means dads can ask questions without judgement.”

When they can meet up safely, next on the agenda is a community project to upcycle children’s bicycles after the community group received a donation of old trikes.

Graham said: “I’m not DIY minded so I know it won’t be for everyone, but I’m hoping people will want to push themselves outside their comfort zone.

"In that environment, where you are doing an activity, you start talking about the kids or people’s experiences and it encourages them to open up without pressure.”

Quality manager Jay, 39, who has two children, a 17-year-old son, and a 12-month-old daughter, said the group gives him chance to chat to dads without judgement.

He said: “We’re just fellas chilling, relaxing and keeping an eye on the kids.

"They are not able to mix and mingle at nursery, so it gives them chance to interact over the screens.

"There have been times we’ve met up at the café and the kids have enjoyed being able to just be kids.

“There’s not a lot of support out there for dads, and we don’t usually go looking for it.

"I don’t think we see each other as support so much but having chance to talk in this environment means you get stuff off your chest early and things don’t build up.

“It’s not often dads will sit there and say how are you finding this?

"What milk formula are you using?

"It’s good to be able to ask a question and feel like you’re not going to get judged.

“When we can, we are planning to come together in the evening to do video gaming, board games, or just chatting with a brew.

"We’re there because we’re dads, so this is where we can chill out and talk without necessarily having the peer pressure of being ‘lads in the pub’.

"It makes you feel more comfortable.”