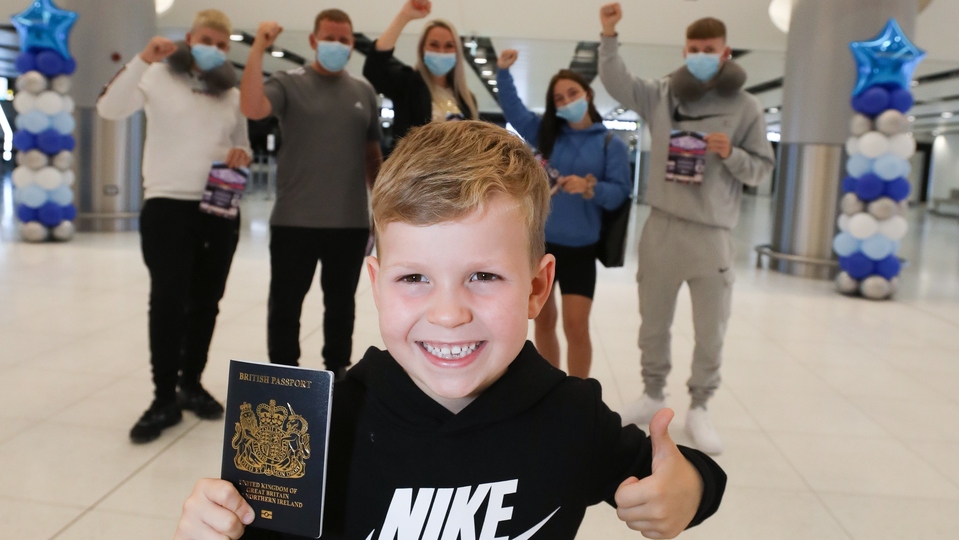 The Thompson family, fly out from Manchester Airport's new Terminal 2.

A Jet2.com flight to Menorca was the first to take-off from the expanded Terminal Two, which is the centrepiece of the hub’s £1bn Manchester Airport Transformation Programme (MAN-TP).

Work started on the transformation in 2017 and – despite a delay of more than one year to the opening as a result of the pandemic – the facility was officially opened by Manchester Airport’s Managing Director Karen Smart and Jet2.com’s General Manager at Manchester Airport, Marc Burns.

Passengers then had their first opportunity to sample the new terminal’s state-of-the-art facilities, including a worker bee inspired honeycomb lighting feature and a giant media wall.

A range of new shops, cafes, bars and restaurants also opened their doors today, with more to open throughout the week as passenger numbers increase.

In true Manchester Airport style passengers were treated to a range of entertainment from local bands and a DJ. Plus, a prize draw giveaway for Jet2.com flights and 1903 Lounge passes.

The first passengers through the doors going to Menorca were the Thompson family from Preston, Lancashire.

"We only travel once a year and have been through all the other terminals, but this new one is definitely better than anything we’ve seen before.”

Two further Jet2.com flights will depart from the terminal today, and from tomorrow, TUI passengers will join them.

It is hoped that further airlines will transition to operating from the new terminal in the coming weeks as demand for travel increases, with a government announcement due tomorrow on its traffic light lists for travel.

“This is a hugely significant milestone for our airport, our city, the North as a whole and the wider recovery of the travel industry.

“After a hugely challenging 16 months, we are delighted to be delivering some positive news and welcoming the first passengers into our new terminal extension.

“The impact of the pandemic on the travel industry means we are not able to immediately welcome as many customers and airlines into this fantastic new facility as we would have hoped.

"However, as Government restrictions continue to be eased, and travel to more destinations is opened-up in the weeks ahead, we will be making further announcements about the carriers and retailers operating from Terminal Two.”

“The new terminal extension at Manchester Airport is fantastic news for our customers, and we are delighted to be the first airline to take off from the expanded terminal this morning.

"From today all of our flights will depart and arrive from the expanded Terminal Two, with the exception of arrivals from Jersey."

The expanded terminal’s light, bright and airy check-in hall sets the tone for the passenger experience, with a modern security area equipped with the latest technology, and a departure lounge packed with iconic features including a honeycomb light installation and a new 81 square metre digital screen.

A wide range of new shops, bars, cafes and restaurants will feature in the new terminal, with local brands Archie’s, The Bridgewater Exchange by Joseph Holt and Pot, Kettle, Black open initially, in addition to two new, exclusive passenger lounges.

Benefits to the wider region have included the creation of more than 1,500 jobs in the construction phase alone, including more than 150 apprenticeships giving young people an opportunity to take their first steps on the career ladder.

To find out more about the new Terminal Two, visit https://www.manchesterairport.co.uk/at-the-airport/terminal-2/