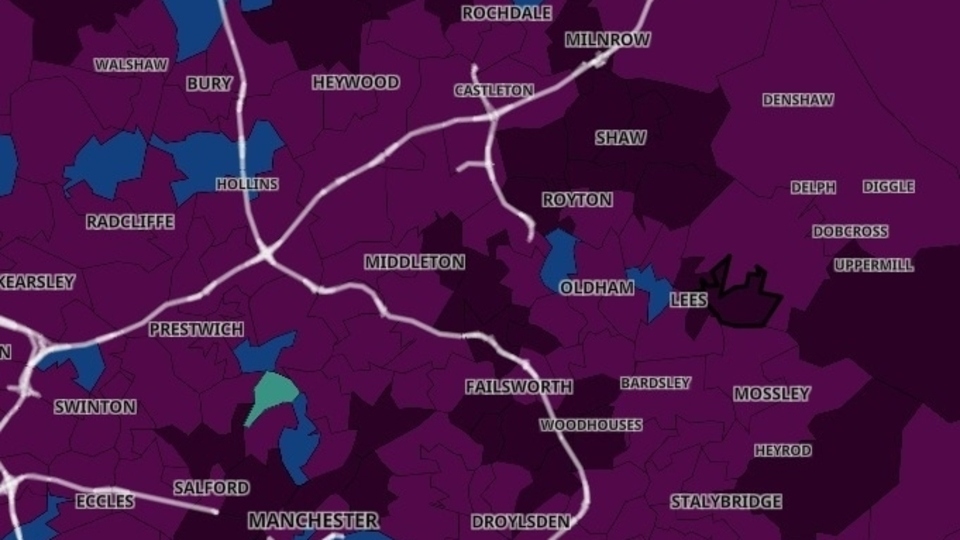 Two neighbourhoods in Saddleworth have emerged as the region’s Covid hotspot as cases continue to soar across Greater Manchester.

The Saddleworth villages of Springhead and Grasscroft recorded an infection rate of 1,459.4 per 100,000 people, according to the latest hyperlocal data.

The virus was ‘suppressed’ in the area as recently as late May, but official figures show 88 cases during the week to July 15.

That is 38 more cases than the previous seven days, and a rise of 76pc.

Health bosses across the region are sure to be concerned given these numbers do not yet take into account the impact of ‘Freedom Day’ – the lifting of all social distancing restrictions on July 19.

While the vaccine roll-out has weakened the link between infection and hospitalisation, 308 Covid patients were admitted to NHS hospitals in Greater Manchester in the week to July 11.

On July 13, 59 were on mechanical ventilation.

And, returning to the latest hyperlocal data, Springhead and Grasscroft is not the only area of Oldham with worryingly high infection rates.

Six of the 10 worst hit areas during the week in question were in the borough, with the remaining four being in parts of Wigan and Manchester.

These nine areas complete the top ten hotspots in the region, according to the latest local data:

This Wigan village, not far from Haydock racecourse, is the second biggest hotspot in Greater Manchester.

This was also a leap of 41 positive tests from the week before – and increase of 71.9pc.

Just three miles north west of Golborne, this is another area of Wigan that saw a very high number of cases.

This area of Oldham on the border of Manchester and Tameside was the third worst hit part of the city region.
Its infection rate stands at 1075.3 after racking up 67 cases –  25 more than the week before.

Another unwanted entry for the borough of Oldham.

This neighbourhood has an infection rate of 1073.9 having recorded 58 positive tests over the seven days to July 15.

This area in the north of the borough was another to see a four-figure infection rate, which now stands at 1066.9.

There were 59 cases recorded in the neighbourhood, which is nine more than the week before – a rise of 18pc.

Yet more worrying news for Oldham.

The area of Lees and Hey saw 62 cases over the seven days to July 15 – 24 more than the previous week.

Oldham’s final entry in this list, Shaw and Crompton has an infection rate of 1025.5 according to the latest available figures.

There were 60 positive cases over the week to July 15 – six more than the week before, representing a rise of 11.1pc.

A second entry for Wigan, Lowton Common has an infection rate of 1021.3 after tallying 81 cases over the most recent seven day period.

That is 18 more positive tests than the week before and an increase of 28.6pc

The top 10 is completed by this area of central Manchester.

The neighbourhood recorded an infection rate of 992.5 during the week to July 15.