Fire service urges people to stay out of open water 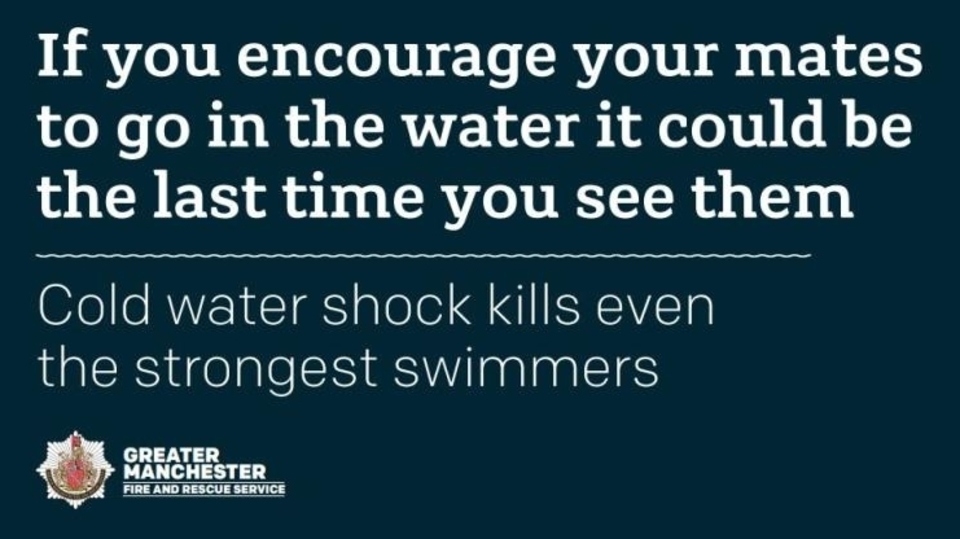 As temperatures continue to soar across the UK, Greater Manchester Fire and Rescue Service (GMFRS) is urging people to stay safe by not swimming or jumping into open water.

The plea comes after more than 10 people lost their lives, or remain missing, in open water across the UK since the heatwave began.

GMFRS’ Head of Prevention Area Manager Paul Duggan said: “Our thoughts are with the families and friends of all those who have lost loved ones in open water, particularly over the past week or so, since the prolonged hot weather arrived.

“We urge people not to go into open water, no matter how hot it is outside.

"Even strong swimmers can suffer from Cold Water Shock and it can kill you in just 60 seconds.

"You also never know how unpredictable under-water currents can be, or what is lurking beneath the surface – people have drowned after getting tangled up in undergrowth and other things hiding in the water.

“We don’t want to stop people having fun, though safety is key here as we continue with our mission to educate people of the dangers that come with going into open water.”

GMFRS is supporting the first ever World Drowning Prevention Day, alongside other fire and rescue services in the UK and the National Fire Chiefs’ Council, in a bid to further raise awareness of the dangers of open water and prevent accidental drownings.

The global event is organised by the World Health Organisation and will take place on Sunday (July 25).

Following the launch of its latest water safety campaign on June 23, GMFRS is working closely with family members and friends who have lost loved ones to accidental drowning - who are sharing their ‘stories’ to prevent others having to go through what they have.

The second phase of the campaign sees new banners being put up in areas where young people have drowned or tend to visit with their friends, as well as at community fire stations across the city-region – with clear messages highlighting the dangers of open water.

Bespoke banners dedicated to those who have drowned in Greater Manchester’s waterways, and whose families are involved with the campaign, are also due to be put up at the River Etherow, Greenbooth Reservoir, and Debdale Park – where Jack Pullen, Paul Lawson and Mark Allen lost their lives.

Lots of social media messages have been shared as part of the ongoing water safety campaign, including targeted messages and content which will appear on teenagers’ mobile phones and social media newsfeeds.

Later on in the summer, adverts will be appearing on phone kiosks and digital displays across Greater Manchester, reinforcing the important message of never jumping into or swimming in open water.

Mr Duggan added: “GMFRS’ firefighters carry out regular water rescue training, though sadly, many water incidents result in fatalities with people drowning before we have time to get to them.

“There are a number of throwlines in place across Greater Manchester’s high-risk waterways, such as Greenbooth Reservoir, Dovestone Reservoir and Debdale Park, containing information about what people should do if they come across someone who is struggling in the water.”

Find out more about GMFRS’ campaign on its website here