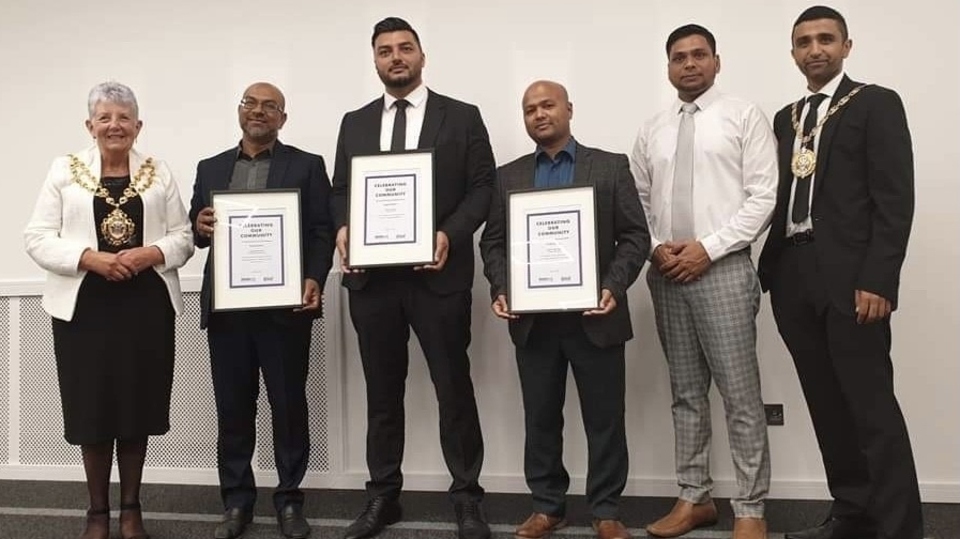 Three Oldham men of have been honoured for their remarkable community achievements.

Oldham's Mayor, Cllr Jennifer Harrison, and her consort, Cllr Shaid Mushtaq, were guests at the 'Celebration Of Our Community' event, organised and hosted by Amin Babor Chowdhury at the Kick Sonic Football Centre in Westwood.

Muzahid Khan has recently been appointed as a Deputy Lieutenant of Greater Manchester in recognition of his outstanding contribution to life in Oldham, and he has recently published a book, The Gift of Giving, with proceeds going to Maggie's Oldham.

Darren Clarke DL congratulated him on his achievements.

Haroon Danis won the North West Fashion and Beauty Enrepreneur of the Year 2020 award in recognition of the success of his skincare business, Skin HQ, set against the backdrop of pandemic challenges.

His company donated £1.3 million of facial treatments to relieve mask irritation and stress for NHS staff working on Covid-19 wards.

Haroon has also written a book, The Freedom of Franchise, supporting would-be entrepreneurs, and is soon opening a branch of Skin HQ on Yorkshire Street.

Meanwhile, Moinul Islam was recognised in the 2021 New Year's Honours List when he was awarded the MBE for his contribution to sport, community and education.

It offers a wide range of non mainstream sports, engaging young people in activities not normally included in the school curriculum.

And inspired by his daughter, Moinul has published a series of children's books - Anisha's Adventures.

The Mayor said: “It was a pleasure and privilege to congratulate them and present the awards.”