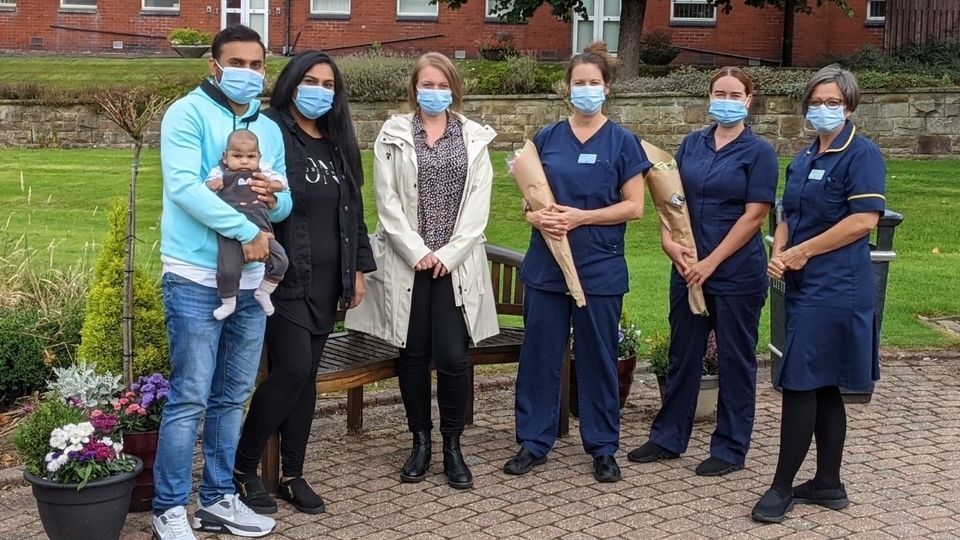 A very special reunion at The Royal Oldham Hospital has reunited two dedicated neonatal nurses with the family of one of their former patients to mark this year’s National Neonatal Nurses Week (September 13-19).

National Neonatal Nurses Week is a time to celebrate the dedication of neonatal nurses and the big difference they make to the lives of the tiniest patients and their families.

Organised by neonatal charity, Spoons, two neonatal nurses from The Royal Oldham received an extra special thank you from the family of five-month-old Fariq Hussain Chowdhury (born when his parents were living in Rochdale, who now lives in Burnley), when they were reunited this week.

They organised a reunion for nurses Katie Broadbent and Lauren Woolerton, both from Holmfirth, with Fariq and his family.  Katie and Lauren were part of a team of nurses from The Royal Oldham’s NICU (neonatal intensive care unit) that cared for Fariq for over a month earlier this year.

Fariq was born on April 7, 2021, and was delivered via an emergency caesarean-section after his mother, Ariifa Hussain, reported feeling reduced movements.

Fariq needed immediate respiratory support and was diagnosed with severe hypoxic-ischaemic encephalopathy (HIE); a condition caused when a baby’s brain does not receive enough oxygen and/or blood flow at the time of birth.

HIE can affect the brain and cause problems in the lungs, liver, heart, bowel and kidneys.

Fariq’s mother, Ariifa, said: “It was terrifying when Fariq was first born and moved to the NICU.

"Not only were we incredibly worried about his condition, but the world itself was a very scary place.

"As it was during the pandemic, I was so frightened about what this new virus could potentially do to my very poorly baby if he contracted it.

“All of the doctors and nurses at The Royal Oldham Hospital were wonderful and now Fariq is almost five months old and thriving.

"We want to say a huge thank you to everyone involved in his care.

"We are so grateful. Katie and Lauren really stuck out to me and my husband, as their kind words made us feel comfortable and at ease when we were on the unit and gave us the confidence that we could and would get through it.”

Kirsten Mitchell, Founder of the Spoons Charity, said: “For parents of neonatal babies, NICU nurses are superheroes that wear scrubs not capes.

"When babies are on the units, the nurses form a critical part of a support system for parents; parents who are often highly stressed and anxious about their baby.

“Once a baby is discharged and able to go home, being able to properly mark that moment and thank the nurses involved in a child’s care is an incredibly important part of a family’s journey, however, the pandemic has made that impossible.

"There were no hugs and celebrations for so many families and no opportunity to thank the incredible neonatal teams.”

Katie Broadbent, NICU nurse at The Royal Oldham Hospital, said: “It’s been brilliant seeing Fariq and his parents today. Lauren and I have loved every minute.

"You wouldn’t know it was the same baby to the one we first met five months ago.

"We’re delighted to see him thriving and doing so well. His parents should be very proud of him, but also very proud of themselves.”

The NICU at The Royal Oldham Hospital and Spoons have been working in partnership since 2015.

Volunteers from the charity spend time on the unit to provide peer support to parents, as well as offering trauma counselling, bereavement support and community groups and play sessions.

Yvonne Fletcher, Neonatal Lead Nurse and Mental Health Champion at The Royal Oldham Hospital, said: “This week is indeed all about honouring the hard work and dedication of our neonatal nursing team, but we are so proud of our work with Spoons.

"Through our partnership working, we really do provide the best care for neonatal families during their time in hospital and beyond.”