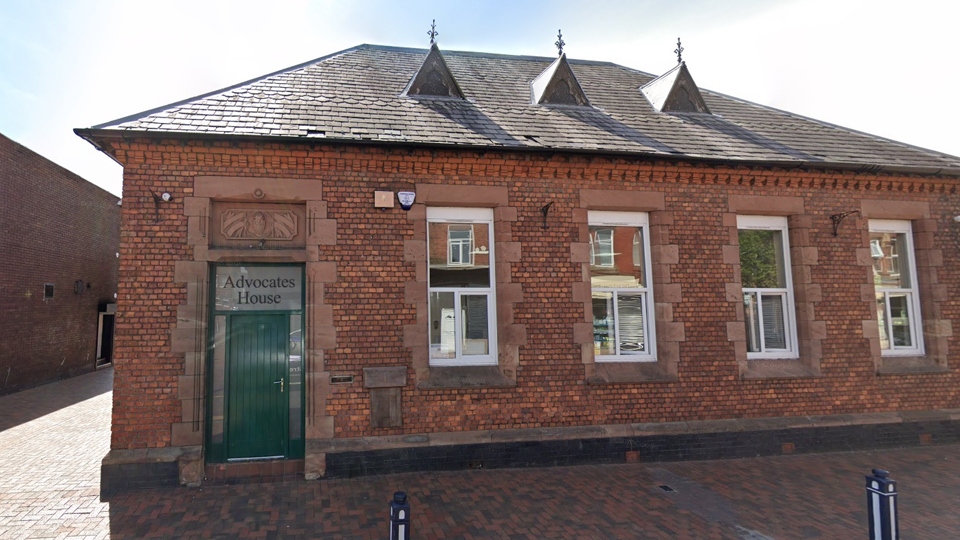 A '50 shades' sex club has been shut down following a raid after neighbours raised concerns about a ‘dungeon’ in the basement.

The sex club occupies Advocates House on Market Street in the middle of the town centre, and sits a few hundred yards down the road from MP Andrew Gywnne’s constituency office and the town hall.

Residents had complained that ‘alleged unlicensed activities’ were happening in the building, and that also there was a ‘dungeon’ in the basement where alleged sexual activity was taking place.

The Kink Society is advertised online as a ‘private social club and safe space haven for members of the LGBT+ community to congregate and meet without the dangers of victimisation, bullying or prejudice’.

The listing states it is open from 8am ‘to late’ seven days a week and has a ‘fully equipped dungeon’.

Pictures on The Kink Society website show a red lit room  painted black with a four poster bed, restraints and a wall of bondage accessories.

Events are priced at between £10 and £40, according to the Yell listing.

It has earned a string of five star reviews on the site this month, with one poster describing them as ‘pioneers in their field’.

However residents’ complaints sparked a joint enforcement visit which led GMFRS to serve a prohibition notice to restrict access to the premises.

This was on the grounds that there was no working fire detection in place, and no ‘separation between commercial and residential premises’.

Paul Fearnhead, head of protection at Greater Manchester Fire and Rescue Service, said: “Working closely with the council and police, we have acted on fire safety concerns, resulting in robust action being taken to keep people safe.

“GMFRS takes all breaches of fire safety extremely seriously and will take enforcement action where necessary to protect our communities.”

Police officers also arrested the occupier and manager of the premises who allegedly breached an order whilst on licence, and their investigation is continuing.

Chief Inspector Lee Broadstock, of GMP’s Tameside division, said: “This premises was causing serious concern within the neighbourhood area and, thanks to the multi-agency approach taken, this premises is now closed and enforcement action is being progressed.

“This shows that we take robust action and use our full partnership powers to keep our neighbourhoods safe.”

The council is also investigating other alleged unlicensed activity and change of use of the premises.

Cabinet member responsible for enforcement Councillor Allison Gwynne said: “We take complaints from residents very seriously and this premises was clearly causing a serious concern in the neighbourhood.

“I’m pleased our joint enforcement visit with our police and fire service partners has resulted in the premises being closed down while further investigations continue.

“Most businesses are happy to work closely with the council and other public agencies to ensure they comply with regulations. Where businesses don’t comply, we will work with our partners to take the appropriate enforcement action.”