You are Here: Home » News » Main News » These are the Greater Manchester Covid hotspots - and areas where virus is still dwindling 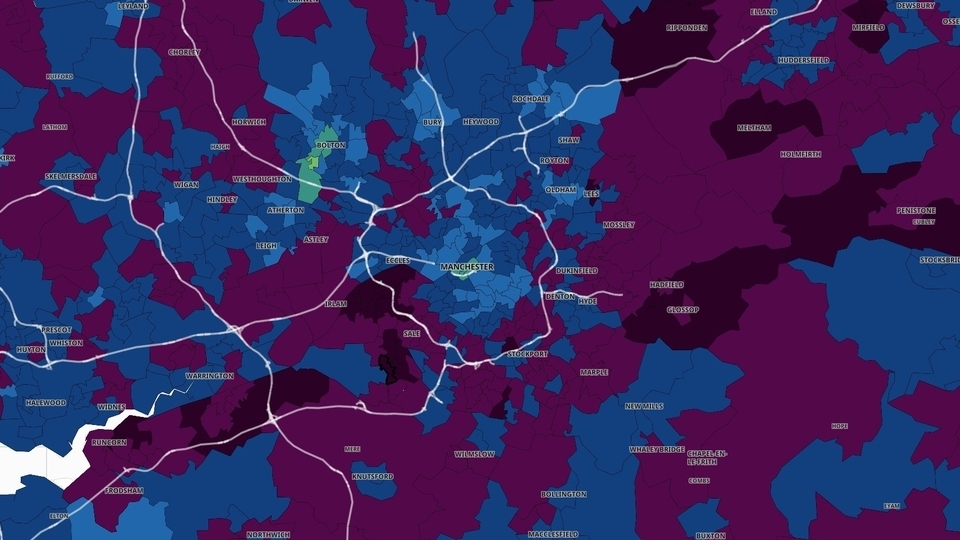 However, parts of Bolton, Salford, Bury and Manchester have seen the lowest local infection rates, with cases in single figures in five areas.

The region’s 20 Covid-19 hotspots and areas where the virus is dwindling have been revealed through an interactive map which charts the number of positive test results in each neighbourhood across the country using government data.

It shows the number of infections per local area, broken down into neighbourhoods containing roughly 7,000 people.

The number of new cases is then used to calculate the infection rate per 100,000 people.

In the week to October 5 – the latest available local data – the Trafford neighbourhood of Flixton and Moorside recorded the region’s highest infection rate.

There 83 residents had tested positive for the virus, a rise of 18 new cases.

At third place is Davyhulme, which borders Flixton and Moorside in the north of Trafford.

This area saw 94 incidences of the virus, resulting in an infection rate of 1,125.2.

There were 38 more cases than the previous week, according to the data.

In fourth place is Urmston East, where the infection rate also clears a thousand, standing at 1,007.1 per 100,000 people.

This neighbourhood saw 74 new cases, an increase of 42 from the last seven day period.

Timperley North, also in Trafford, has an infection rate of 988.8 with 84 new cases.

This was an increase of 36 new positive cases.

At sixth place is Altrincham East, where there were 100 incidences of the virus in the week to October 5.

This equates to a localised infection rate of 974.1.

There were an extra 62 new cases in the neighbourhood – a huge 163 per cent increase on the previous week.

Meanwhile at eight place, Trafford Park West and  Kingsway Park has an infection rate of 900.3 per 100,000 people.

Norris Bank in Stockport, one of only two areas outside of Trafford to make the top ten biggest hotspots, is in ninth place.

It recorded a local infection rate of 900.3, with 56 new incidences of the virus.

Finally Cheadle Hulme South East – also in Stockport – saw 64 new cases in the week to October 5, equating to an infection rate of 875.2.

At the other end of the scale, the Bolton neighbourhood of Rumworth South has the region’s lowest infection rate.

Next is Central Bolton with a rate of 73.6 and six new incidences of the virus.

Rumworth North, also in Bolton, saw just seven new cases and has an infection rate of 79.4.

In fourth place is Daubhill and Fernhill Gate, another Bolton neighbourhood which saw cases drop from the previous week, and has an infection rate of 94.3.

There were seven positive Covid-19 cases, a drop of three from the week prior.

Higher Broughton is at fifth place with 16 new cases, dipping by nine from the week before.

This averages as a localised infection rate of 100 for the Salford neighbourhood.

The Bury area of Higher Woodhill also makes it into the top ‘notspots’ with an infection rate of 105, and six Covid-19 cases.

In seventh place is the Manchester area of Rusholme East, where cases are also declining.

Abbey Hey in Manchester is at ninth place with 11 cases recorded, equating to an infection rate of 113.2.

The neighbourhood saw a reduction of eight cases from the previous seven day period.

In tenth place is nearby Gorton South where the infection is 115.1 per 100,000 people, with just 13 cases recorded – one fewer than the previous week.