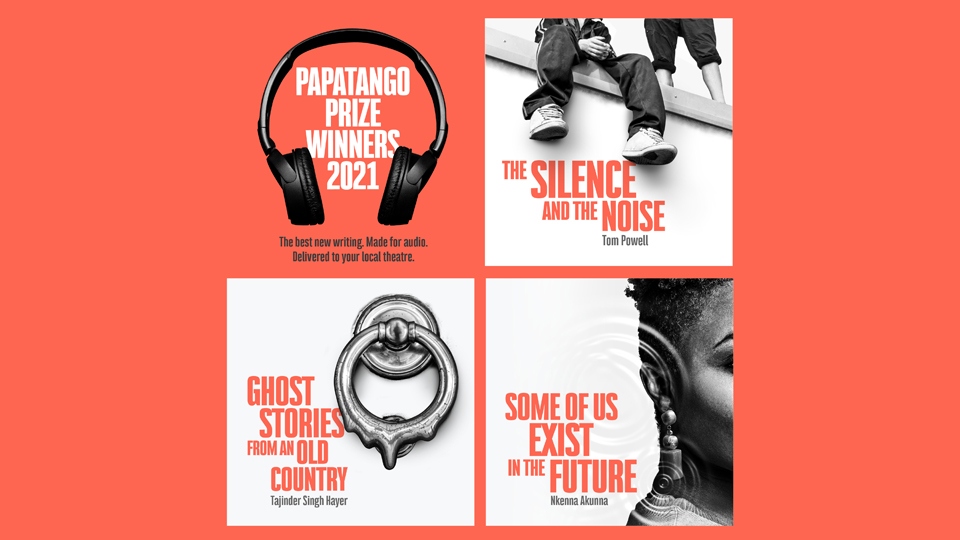 The Paptango winners will be accessible at the Coliseum in February

In a reimagined iteration of the annual awards, in partnership with English Touring Theatre (ETT) the audio productions will play from free listening stations in theatres across the UK, with copies of the scripts including braille translations available. Audiences can book a free slot to listen to the plays in the Coliseum auditorium between 1–4 February 2022 using a device provided by the theatre, or on their own device if they prefer.

The three award-winning audio productions are:

Nkenna Akunna’s Some of Us Exist in The Future is Directed by Rasheka Christie-Carter with Composition and Sound Design by Xana and features: babirye bukilwa as Neighbour/You, Florian Clare as Coe, Funmi James as Isata, Rachel Nwokoro as Chiamaka and Oseloka Obi as Black Masc/Dad.

Chiamaka is new to all this. Fresh off the plane from the UK, she's new to Brooklyn and its extremes. She's new to queer dating, to the realities of being an immigrant. Most of all, she's new to the voices of the gods...

Utterly original, wryly funny and always gripping, ‘Some Of Us Exist In The Future’ follows one woman’s journey to finding her place in a world that’s not all it seems.

Nkenna Akunna is an Igbo playwright-performer from London. Akunna was a member of the 2017/18 Soho Writers Lab cohort, the 2018 VAULTS Festival New Writers Programme, and is currently an MFA candidate in Playwriting at Brown University. Akunna is a recent recipient of The Kennedy Center's Rosa Parks Playwriting Award, Lorraine Hansberry Playwriting Award, and the Neukom Institute Literary Arts Award for Playwriting. Akunna is also co-director at Skin Deep, a collective that makes space for Black creatives and creatives of colour through cultural production.

Tom Powell’s The Silence and The Noise is directed by George Turvey with composition and Sound Design by Asaf Zohar and features Aldous Ciokajlo-Squire as Ant and Shakira Riddell-Morales as Daize.

Every teenager knows what it’s like to be stuck between things: childhood and maturity, innocence and experience, hope for the future and uncertainty about what that will be. But Daize is torn between even greater challenges: her love for her vulnerable mother and her dangerous friendship with Ant. An outsider with knockout trainers, Ant has just appeared on her doorstep, bringing with him a whole world of trouble.

‘The Silence and The Noise’ captures the story of two young people on the edge.

Tom Powell was the 2019-21 CRSC Writer in Residence at Pentabus Theatre and was chosen for the BBC Studios Writers’ Academy 2019/20. Powell’s previous writing includes I Dare You (Nottingham Playhouse/Curve - shortlisted for the Soho Young Writers’ Award) and Little Echoes (Hope Theatre -  published by Methuen/Bloomsbury). They previously won the OTR National Radio Drama Award and the Harry Porter Prize. Powell was selected for the BBC Words First spoken word programme, is an Arts Council England/BBC New Creative and his short audio drama Love Beyond the Zoo will be broadcast on BBC Radio 4 Extra in September 2021.

Tajinder Singh Hayer’s Ghost Stories from an Old Country is Directed by Jessica Lazar with Composition and Sound Design by Farokh Soltani and features Rebecca Crankshaw as Paula, Raj Ghatak as Dal and Shane Zaza as Amar.

Dalvir has always told a good ghost story, properly unsettling, dark tales to send a chill right through his younger brother Amar. But now Dalvir’s almost a ghost himself, cloistered and secretive. Amar desperately wants to reconnect with the only family he has left, but can he unravel Dalvir’s stories to find a way back to his brother?

Threaded through with captivating fables, Ghost Stories from an Old Country is a riveting and poignant exploration of the ties that bind us.

Tajinder Singh Hayer lectures in Creative Writing at Lancaster University. Their writing credits for theatre include North Country (Freedom Studios), Players, Mela (Leeds Playhouse) and In This House (Menagerie); and for radio, The One That Got Away (BBC Radio 3), If You Can’t Stand The Heat, ID (BBC Radio 4), We’re Not Getting Married, Ask Mina (BBC Asian Network), and Tidelands. Television credits include Numtums. They previously won the BBC’s The Spin competition with their play People Like Me in 2003. They have been a writer on attachment at the Leeds Playhouse, BBC Radio Drama Manchester and the National Theatre.

Papatango discover and champion new playwrights, especially people who would otherwise have no pathway into theatre, through a range of grassroots opportunities – all free, open to anyone in the UK and Ireland, and anonymously assessed.