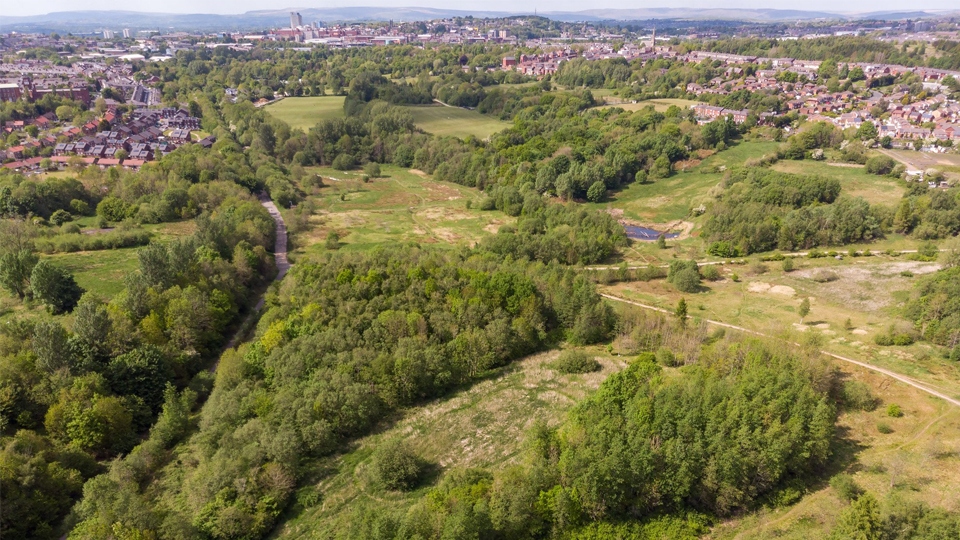 The latest version of a masterplan for a huge urban farm and eco park in Oldham has been revealed as bosses say they have scaled back what will be included in a planning application.

People are being asked to take part in consultation over how the Northern Roots project for land at Snipe Clough, south of Oldham town centre, will look.

The 160-acre site runs from the Grade Two listed Alexandra Park, past Park Bridge and down to Daisy Nook country park.

There have been a number of changes to the plans since the first round of consultation on the overall masterplan, and detailed visitor centre and learning centre designed.

People raised concerns about some aspects of the plans relating to the southern end of the site – specifically the natural amphitheatre, ‘festival field’ and glamping pods.

“What we are hearing from you is that you would prefer proposed buildings to be located at the northern end of the site near to Alexandra Park, and the southern end of the site to be remain largely undeveloped and natural,” an update following the first round of feedback states.

“As an immediate result of your feedback, we have reduced the scope of the area included in the initial planning application for Northern Roots to focus on the top third of the site.”
This has led to the glamping proposal being removed for the ‘time being’, with camping for children and young people in an area next to the proposed learning centre being explored instead.

The natural amphitheatre and performance space, which was initially located half way down the land near to the housing estate in Fitton Hill, has been relocated to sit next to the visitor centre in the north of the site.

The ‘festival field’ has likewise been moved into the northern end of the Northern Roots site close to the visitor centre following consultation responses.

Among the ‘big hits’ however were the proposed natural swimming pond, community orchards, a bike hub and trails facility and plans to create new habitats and increase biodiversity on the site.

Bosses also clarified that there were no new road proposed for the site.

The latest round of consultation runs from November 24 until Sunday, December 12.

Residents can meet JDDK Architects, who are leading on the design of the proposed visitor and learning centres, and the Northern Roots project team and trustees, as well as view the updated proposals and share feedback.

There will be  presentations at 1pm and 3pm about the plans.

Councillor Abdul Jabbar, chair of the Northern Roots board of trustees, said: “We’re at a really exciting point with the Northern Roots project. JDDK Architects have worked closely with the community to co-design the proposed visitor centre and learning centre and have created two unique and iconic design proposals.

“We want to hear from as many residents and local communities as possible. Residents’ feedback is crucial to revising and updating the final plans for Northern Roots.”

A final proposal for Northern Roots will be shared in early 2022 which will include the buildings for which planning permission will be sought.