You are Here: Home » News » Main News » Wind and rain no match for this weekend's festive Santas

Wind and rain no match for this weekend's festive Santas 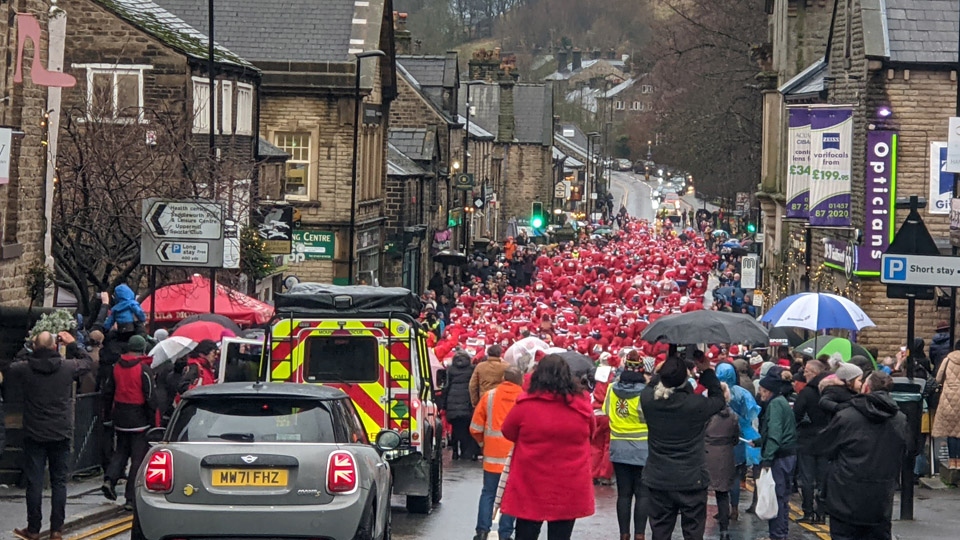 It's all go at the Saddleworth Santa Dash

More than 1,000 resolute entrants shrugged off storm-surge winds, stinging showers of rain and near zero temperatures to take part in Saddleworth’s legendary Santa Dash at the weekend

Organised by a dieheart team of volunteers from Saddleworth Round Table, solo runners, friends and families weathered the 2k and 5k challenge with many taking part to raise money for their own specific charities.

Christine Burbidge who lead a six-strong team from Saddleworth WI said: “The weather threw everything it possible could at The Dash.

“However, with pure grit and determination the ladies got a small team together and completed the circuit with a smile on their faces.

“And we all received a well deserved medal for taking part in this festive day.  Girls just want to have fun!”

Richard Taylor, an Oldham businessman and a Dash veteran said: “It was a really impressive turn out for a great event.

"You could see by all the smiling faces absolutely nothing was going to break the focus on completing the curcuit.

"Some ran solo, some ran with friends and family but everyone ran because they wanted succeed in their challenge.”

Despite conditions not seen since Storm Desmond threatened to cancel the first ever Dash in 2015, Round Table were amazed when virtually all of the 1400 runners who’d signed up came out in festive force to return to the streets and lanes of Uppermill and Greenfield after a two year hiatus.

Andy Rothwell, the community project lead, said "It’s a bit early to say how much we’ve raised yet but our stall holders and mulled wine sellers did a roaring trade as Dashers enjoyed the entertainment hosted by our compare Elliot Eastwick.

"A huge shout out for all the people the helped organise the event, we now have a wet weather plan and sprcial mention to John Arthurs who went above and beyond to make the event happen.

"It’s taken months of organising and planning, John is the biggest cog in a major operation that makes the whole thing work.

"In the new year Saddleworth Round Table plan to host a couple of meetings where they invite local clubs and organisations to pitch for money to help their cause. In the last three years Round Table have given thousands to many worthwhile causes."

If you want to be part of the team who organise the Santa Dash, contact the Round Table at their Facebook page or call Henry Birdcage on 07929 191472.