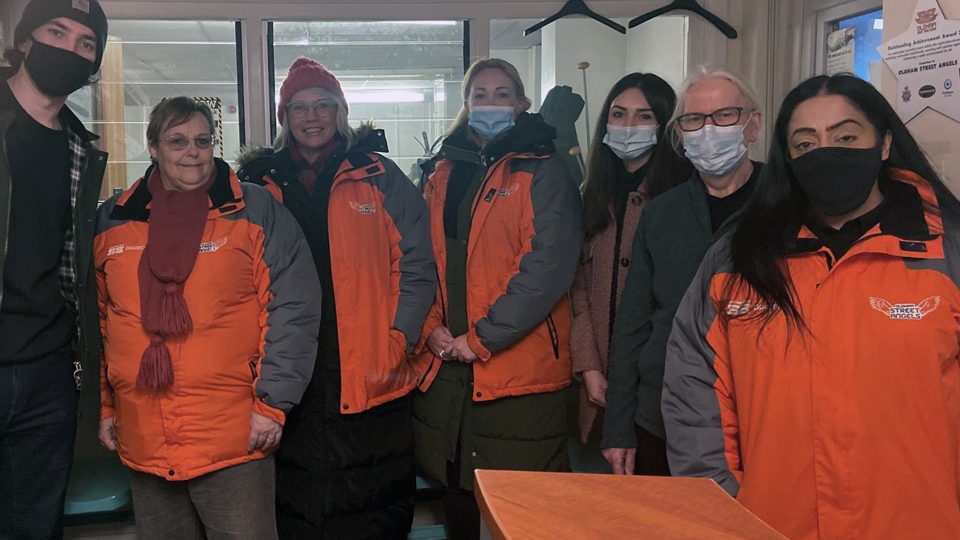 Oldham Council’s Leader has paid tribute to the work of a local charity after spending an evening volunteering with the organisation.

Councillor Arooj Shah joined members of Oldham Street Angels last weekend to see first-hand what they do to ensure the safety of people in the town centre.

A typical night for the volunteers may include giving brews to those who need to sober-up, making sure people get a taxi home safely, collecting empty bottles so no one doesn’t get injured, through to providing clothes for rough sleepers or simply just spending time talking to people.

Cllr Shah promised to go out on patrol with the Street Angels when she helped launched the Trusted People scheme last month. The initiative – part of the Greater Manchester-wide Safer Streets campaign – sees the Angels and officers from Oldham Youth Service visiting tram stops to offer a friendly face and reassurance to people of all ages, especially if they are feeling uneasy as the winter nights draw in.

Cllr Shah said: “It was humbling to go out and see the great work the Street Angels do every weekend.

“The volunteers are people from all walks of life who are prepared to give up their own time to help others, including some of the most vulnerable members of society. They go out in all weathers, throughout the year - they’re a credit to the borough and we are lucky to have them.

“One of the things that was nice to see was the reaction from members of the public to the Angels. People really appreciate them.

“On behalf of the borough I’d like to thank the Reverend Canon Jean Hurlston and all her team for the great work they do.”

The Reverend Canon Jean Hurlston, who founded Oldham Street Angels, said: “We were delighted to welcome Cllr Shah to see our organisation on Saturday night.

“Not only did she stay much longer than planned, she also put on the famous orange jacket and assisted with serving drinks and sorting warm clothes for distribution.”

The Oldham Street Angels were formed 10 years ago.

Initially, just members of Oldham Parish Church patrolled the streets on a Saturday night, offering any support they could to people out enjoying a good time.

The team has now grown and earlier this year they received the Queen’s Award for Voluntary Service, marking their support for the town’s night time economy. Their activities continued during lockdown.

The council and Greater Manchester Police back the organisation’s work.