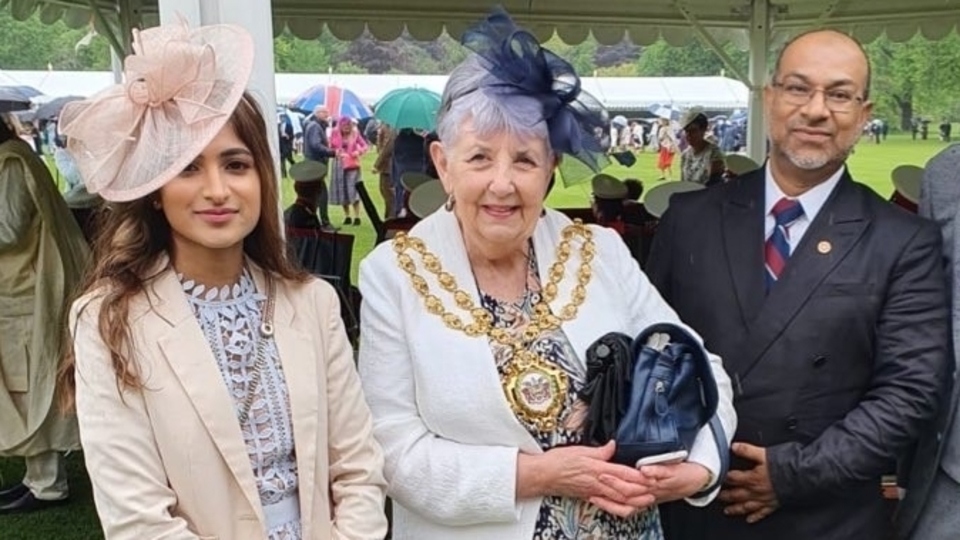 Rain couldn't dampen spirits at HRH The Queen's first Garden Party at Buckingham Palace, in three years, which some proud Oldhamers were invited to yesterday, Wednesday May 11, 2022.

Deputy Lieutenant of Greater Manchester Muzahid Khan, from Chadderton was there, alongside his daughter Syra Khan.

Mr Khan spoke with The Oldham Evening Chronicle and said; "It was a real honour to be there and especially to go with my daughter, who was visiting for the first time.

"Everyone was in a great mood and gleaming when they saw members of the Royal family. It was a very memorable day.

"I was invited because of a recommendation from the Greater Manchester Lord Lieutenant, who put me forward."

The Queen wasn't in attendance, due to mobility issues.  But the Prince of Wales, the Duchess of Cornwall and the Princess Royal were all on duty, amid the sea of umbrellas.

It's not the first time Muzahid Khan has been invited to Buckingham Palace though. He met HRH The Queen, when he was recognised as a young achiever (1998) and he was also recognised by the British Prime Minister for his outstanding contribution to the community (2000).

Deputy Lieutenants are appointed for their endeavours over many years working to enhance the fabric of Greater Manchester.

Muzahid has previously worked in local government, specialising in regeneration, as well as being a volunteer for numerous social and charitable organisations, including, a board member of Maggie’s Cancer Centre, Cranmer Education Trust, Positive Steps, Amana Foundation and the Beacon Community Charitable Foundation.

He has also released a book called The Gift of Giving, which was inspired by his journey growing up as a child in Bngladesh, to getting an education and going on to help thousands of people, through becoming a business mentor.

He said; "I hope that there will be lots of other people from Oldham invited to Buckingham Palace for their endeavours.

"There are so many people doing good work here.

"I think it's always important to serve, to help society and communities, so that's what I will continue to do."

Mayor of Oldham, Councillor Jenny Harrison was also invited to yesterday's garden party, along with her consort.