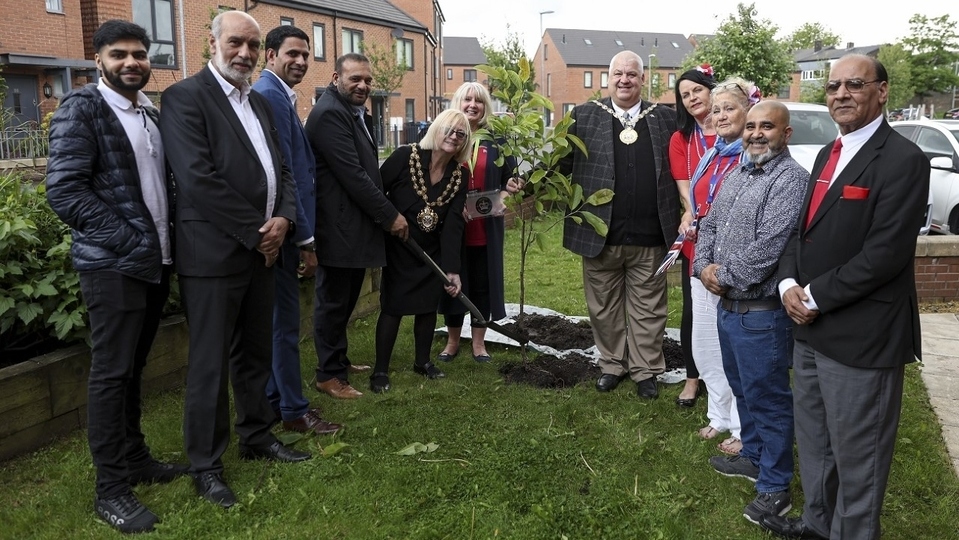 Cllr Elaine Garry, Mayor of Oldham (centre), is joined by guests to plant a magnolia tree at the Primrose Bank Community Centre to mark the Queen’s Platinum Jubilee

Cllr Garry was treated to afternoon tea and had an opportunity to speak to volunteers and local residents at the event that included a whole host of family activities to mark the occasion, supported by Great Places Housing Group and the Primrose Community Fund.

The Mayor also helped plant a Magnolia tree that will take pride of place in the centre’s garden, to mark the Jubilee and the tenth anniversary of the Gateways to Oldham PFI partnership between Oldham Council, Great Places, Wates and Inspiral, which coincides with the 70th anniversary of the Queen’s accession to the throne.

Cllr Garry also had the opportunity to see two banners commissioned by local artist, Andy Fear, working with local residents to mark both occasions, which will be displayed at the centre.

The community centre also plans to bury a time capsule which will include photos and items from 2022 suggested by members of the local community.

Cllr Garry said: “It was great to see so many communities hosting Jubilee events across the borough and to be invited to a number of celebrations.

“Primrose Bank community centre had something on offer for everyone and it was an honour to attend and plant a magnolia tree to mark the Queen’s Platinum Jubilee.”

Jan Wade, Community Development Co-ordinator at Great Places, added: “We were delighted that Cllr Garry was able to join our celebrations to mark what are two important milestones for the residents at Primrose Bank.

“We hope that the tree will provide a long lasting reminder of the occasion and can be enjoyed by members of the local community for years to come.”