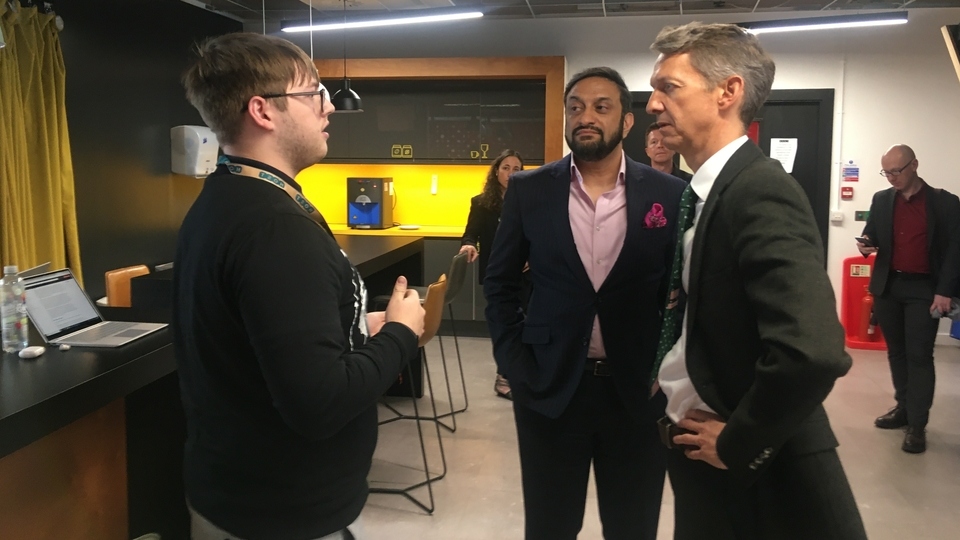 Levelling Up architect Andy Haldane at HOST in MediaCityUK in Salford

The architect behind the government’s levelling up plans has backed Greater Manchester’s calls to be given more control over its post-school skills system.

Local leaders want more influence over the technical education and training opportunities available to people from the age of 16 onwards, saying they would work with employers to build a workforce that has the skills required.

This includes investment in skills needed in the digital, technology and life science sectors as well as the green economy such as for retrofitting homes.

Speaking in Salford, Andy Haldane, who was the head of the Levelling Up taskforce, said skills will be key to ‘unlocking growth’ in the UK.

He said Greater Manchester has the ‘secret sauce’ for levelling up and that devolving the skills system will be a ‘key ingredient’ to make a success of it.

The former chief economist at the Bank of England, who is now the chief executive at the Royal Society for the Arts, Manufacturers and Commerce (RSA), made the comments on a visit to HOST, an innovation hub in Media City.

It comes as mayor Andy Burnham prepares for further devolution talks with the government where he will demand more control over the skills system.

He has argued that by having more influence over the opportunities offered to young people, Greater Manchester can build a workforce suited to its needs.

Mr Haldane, who was responsible for writing the government’s Levelling Up White Paper, said he ‘would like nothing better’ than seeing more devolution.

He said: “There’s no question in my mind that in terms of what is needed to make a success of levelling up, [devolution] is a massive part of that.

“It’s local people that have local knowledge and local agency to get stuff done.

“Within the whole range of dimensions of devo, skills is crucially important.

“If you’re asking me to pick an issue that will be the key to unlocking growth here in Greater Manchester, and indeed across the whole of the UK, there is no bigger or more important one than skills.

“So I think some degree of greater devolution of skills is a key ingredient of making a success of all this.”

Mr Haldane, who left his post as permanent secretary to the Department for Levelling Up, Housing and Communities (DLUHC) in March, described a ‘divine alignment’ of economic, social and political factors that fill him with optimism.

He dismissed claims that the drive to boost skills across the country is down to Brexit, but admitted that leaving the EU makes the need to act ‘more actue’.

And he spoke of his hopes that the country is in the midst of an ‘inexorable tide’ towards greater decentralisation and devolution of powers and responsibilities, saying he would go ‘faster’ and ‘further’ if it were up to him.

Speaking ahead of the negotiations with government, Mr Burnham said devolution of post-16 skills is a top priority alongside transport and housing.

The mayor argued that Greater Manchester has done a better job of spending the adult education budget since it was devolved and got more people back into work than the Department for Work and Pensions when given the chance.

He said: “Skills is a missing piece in the Greater Manchester devolution jigsaw.

“If it gets filled, I think we go up to the next level.”

Greater Manchester’s proposals include further devolution of the post-19 skills system, careers and more employment support in the city-region.

This would involve the creation of a single funding pot for post 19 education and skills, and remove ringfences and barriers that currently stand in the way.

Greater Manchester will also push for further control and influence to ensure technical education has strong links to local demands across the city-region.

Discussions with government officials over further devolution in Greater Manchester are now under way and negotiations are set to start soon.

The mayor has previously said he will also ask for control over train stations and powers to prevent ‘bad landlords’ getting public funds through benefits.

Mr Burnham added: “What we’re saying to the government is the more you add into the mix, the more that you fill in the jigsaw, the more it makes sense and the stronger it will get.”