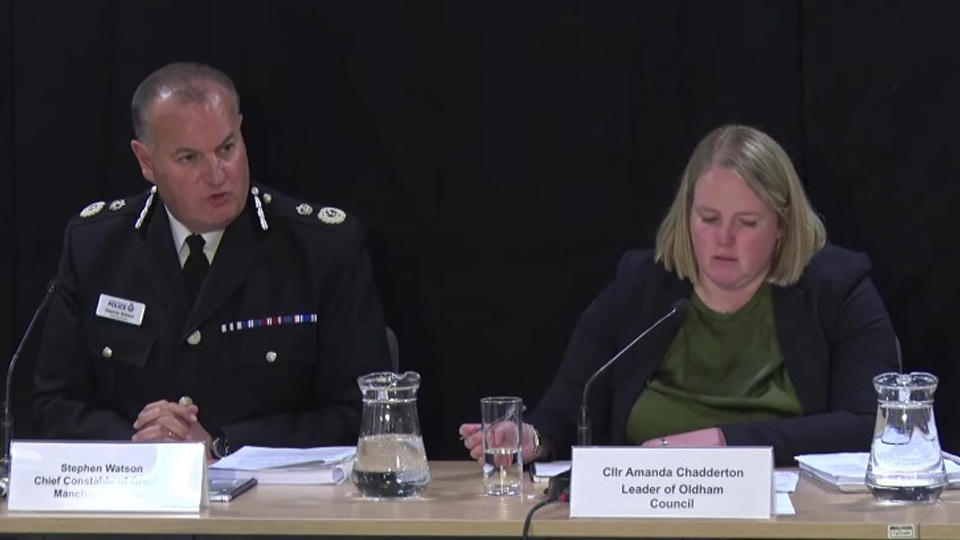 A new criminal investigation has been launched to bring sexual abusers of children in Oldham who believe they have ‘gotten away with’ their crimes to justice, police say.

Following the publication of a damning review into allegations of sexual exploitation of vulnerable young people in the borough, Greater Manchester Police (GMP) have instigated a new police probe named Operation Sherwood.

Chief Constable Stephen Watson told a press conference that the aim of the investigation will be to apprehend Oldham-based offenders who have historically preyed upon children.

And Oldham council has launched a new dedicated helpline for people affected by the issues raised in the review, and to report past incidents of abuse.

It comes as the review, led by experts Malcolm Newsam and Gary Ridgway, concluded that in the years 2005-2006 and 2011-2014, children were being exploited and let down by services which tried and failed to protect them.

Their report highlighted the appalling case of ‘Sophie’ – not her real name – who was effectively placed into the hands of predators after trying to report a sexual assault at Oldham police station, which led to a further 24 hours of torment in which she was raped repeatedly by strangers.

Sophie was aged just 12 years old at the time of the horrific abuse in 2006.

Mr Newsam and Mr Ridgway say there were ‘serious failures’ in the way GMP handled its criminal investigation into her rapes, which only led to two men being arrested out of eight reported offenders.

Now Chief Constable Watson says he has tasked a team with working through the review team’s report in ‘forensic detail’.

“Last year, supported by a significant investment from the Mayor we established in GMP a force child sexual exploitation unit originally comprising 85 experienced investigators,” he told the press conference on Monday.

“In the light of this report, I have strengthened the team further through the allocation of 21 additional investigators.

“Under the banner ‘Operation Sherwood’ we have launched a major further criminal investigation so as to seek justice for those who have suffered so gravely.

“I can tell you that the team in similar investigations, notwithstanding literally dozens of arrests, have already charged 13 offenders with a total of 187 offences and these are cases are currently being brought before our courts.

“This same approach under Operation Sherwood will be applied with real vigour to Oldham-based offenders in the coming weeks and months.”

The police boss added: “It is regrettably the case that the dreadful harms and trauma that have been suffered by the people highlighted in this report, and much as we might want to, we can’t turn the clock back.

“But we can do something on their behalf in respect to those that have behaved so despicably in preying upon vulnerable children in the awful ways that are described.

“My message to those offenders is a simple one. If you think you have got away with it, you are wrong and we are coming for you.”

Speaking about the contents of the review he said GMP accepts its findings in full.

Chief Constable Watson added: “It does not make for easy reading in many parts. It speaks to an era as is now commonly understood where public authorities, including the police, all too often failed very vulnerable children.

“On too many occasions, we the police were not there for you when you desperately needed us and for that I am truly sorry.

“I can say without equivocation, that both our internal and multi-agency arrangements are today’s world’s apart from that described in this report.”

Chief Constable Watson and Oldham’s council leader Amanda Chadderton quizzed whether police and council officers would be held to account over their failings identified in the report, particularly with the response to Sophie’s case and her later complaints.

The review had stated that the ‘denials’ subsequently issued to Sophie had fed a view that both agencies were more ‘concerned about covering up their failures’ than ‘acknowledging the harm had been done to a vulnerable young person’.

However the chief constable confirmed that they would now be looking at all aspects of the case – including the actions by GMP officers.

“Where misconduct is there to be discovered it will be properly dealt with. I’ve already indicated that I have a team that is going through this report line by line,” he said.

“That will include having a very careful look at who precisely was involved in all of the dynamics described and where any misconduct, specific misconduct is identified, we will with stakeholders – Independent Office of Police Complaints to begin with – we will make a joint assessment of where we take that.

“What I would say is thus far, much of what has been picked up upon in terms of individual behaviours falls more into the learning than the bold misconduct element but it simply is the case that there are some uncomfortable findings in this report and we need to get to the bottom of the whys and the wherefores.”

Coun Chadderton told the press conference that the ‘vast majority’ of social workers ‘go to work every day in really challenging circumstances to look after and protect some very, very vulnerable children’.

But she added: “However that does not justify some of those things in that report, and particularly the failings and the response from the council to Sophie as an adult were unacceptable.

“And that is not justifiable. We will be going through this line by line as well and if there is action to be taken we will take that action.

“I do think the majority of it falls around a cultural issue. We have a brand new management structure in children’s services.”

Greater Manchester Mayor Mayor Andy Burnham said: “We are going through a difficult process that is flushing things out that we all need to be aware of. There will be follow up and that’s the whole point of the process that we’re engaged in, and it’s an ongoing process.”

Oldham council has said that anyone affected by the issues in the review of historic child sexual exploitation in the borough, or who needs to make a report to us of incidents that occurred in the past, can speak to trained professionals by calling its new dedicated helpline on 0161 770 1045, or emailing oldhamindependentreview@oldham.gov.uk.

People who need support or legal advice can also get in touch with the Maggie Oliver Foundation here.