You are Here: Home » News » Main News » Revamped city centre hub to play a ‘crucial’ role in mission to end youth homelessness by 2037 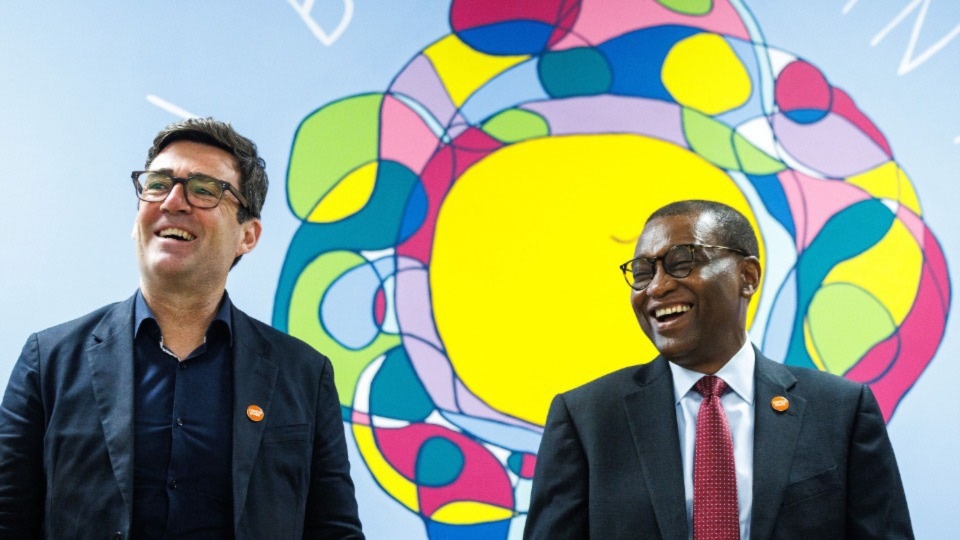 A city centre hub at the forefront of the mission to end youth homelessness by 2037 has reopened following a £1.8m revamp.

Centrepoint says its refurbished Oldham Street base will offer young people across Greater Manchester a safe, welcoming and inspirational environment in which to recover and grow and leave homelessness behind for good.

The charity’s building has been completely modernised, with changes including secure interview rooms for mental health support, and a new roof garden that provides a space to support young people, especially those who have been traumatised.

Its Homelessness Prevention and Relief Service (HPRS) offers support to thousands of 18 to 25-year-olds experiencing or at risk of homelessness every year.

Skills development, mental health and other support services are also all available on site to help young people to get back on their feet.

The Northern Quarter hub officially reopened on Friday, having moved to a temporary base in North Parade in March 2020 while the refurbishment was  being carried out.

But he says youth homelessness sadly remains  ‘a very big issue and has become more so through the pandemic’.

“I think there was a situation in the lockdowns where young people who had, let’s say, quite precarious arrangements – sofa surfing – saw those breakdown and there were lots of people who were new to the street.”

Mr Burnham – who launched the A Bed Every Night initiative in 2018 – said Centrepoint had been a massive support in city region’s bid to improve the way it supports those who are homeless or at risk of becoming so.

While ABEN has been successful at driving down rough sleeping, Mr Burnham stress that youth homelessness remains ‘a very big issue’ – particularly post-pandemic and with the country in the grip of a  ‘cost of living crisis’.

The Mayor says there are more than 500 people in ABEN shelters every night, and many of those are under 30.

“The truth of the matter is it’s a very big and growing issue, but in some ways hidden, because lots of people will be in temporary accommodation or sofa surfing and we think, as the cost of living pressures bite in the rest of this year we are all going to face a bigger challenge.

“And the only way we can face it is by doing what we have been doing, which is working in close partnership with organisations like Centrepoint.”

And he says it is ‘really important’ to have a hub that is specifically tailored to meeting the needs of young homeless people.

“Some of the issues that young people face can be quite different from some older people that have been on the streets.

"Young people may be fleeing an abusive situation, or they may be needing support in one way or another.

“I think what Centrepoint provides is a specific service that is very personalised – and that’s what young people need.”

The Mayor shares Centrepoint’s ambition to end youth homelessness by 2037 – and is confident that target can be reached.

“I think it can be achieved and certainly, in the case of Centrepoint, we have a very willing partner.

"We are absolutely prepared to go on a journey of ending youth homelessness by 2037 – 15 years, that’s absolutely doable.”

Those sentiments are shared by Seyi Obakin, Centrepoint’s chief executive, who was also in attendance for the official reopening.

He says the new Centrepoint base is vital for young people, noting that while youth homelessness is a ‘huge problem it’s not a monodimensional one’.

“That’s why a facility like this is absolutely crucial,” he continues.

“It’s a place where you can bring all those different things together that can help a young person .”

This could range from help with health and functional skills to literacy, numeracy and getting a job.

“Whatever it is, this is a place where they can get the help they need, says Mr Obakin.

"And if we can’t provide that help we can connect them to some other organisation who can.

“They should not go without.

"That’s the whole point here – so that when they leave this place, they leave with their head held high.

The job of Centrepoint, the chief executive believes, is to ‘set them on their way’.

“That’s what makes this facility absolutely crucial.,” he adds.

“We see lots of young people coming through and we’re helping them to change their story.”

He agrees with Mr Burnham that difficult times lie ahead, with the cost of living crisis and pandemic both affecting young people, ‘disproportionately’.

But he believes Greater Manchester is well equipped for the battle against homelessness with Centrepoint’s Oldham Street opening its doors once again.

"And I think there’s nothing that is much more powerful than to say to someone ‘I care about you’.

“That’s what this is about.

"This is not just a building for a building’s sake.

"It’s really making a statement to young people that we care sufficiently about you to make a huge investment in your welfare.”