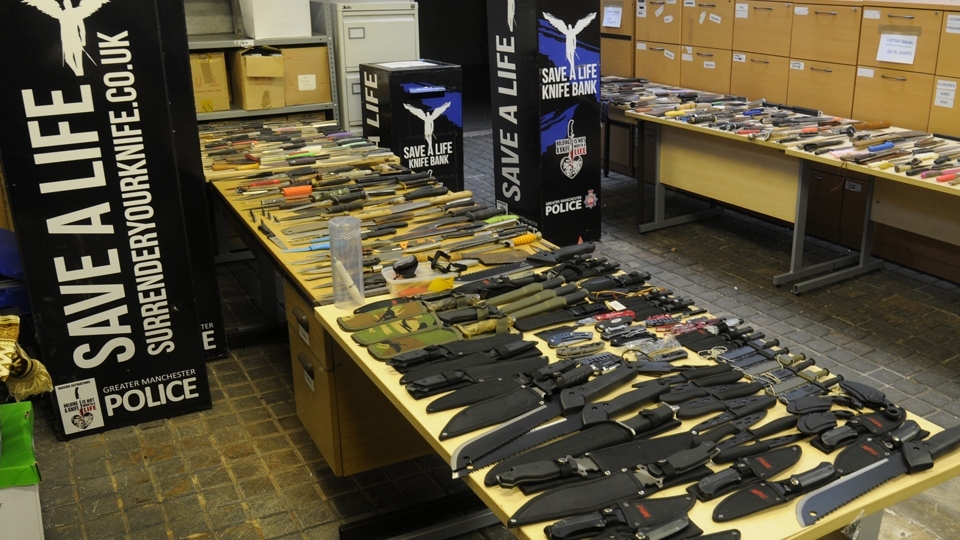 Flashback to a GMP knife amnesty in 2019

In February 2022, in response to three tragic fatal stabbings, Greater Manchester’s Violence Reduction Unit launched a short video encouraging young people, parents and teachers to speak out and seek help if they are concerned about a young person.

The short video, titled #SpeakingOutCouldSaveALife, featured local youth workers and a headteacher, and was seen by over 500,000 people.

Now, in a bid to encourage more people to report concerns around knife and serious violence, organisations and people from across Greater Manchester have come together in the latest video as part of the campaign.

The video shows how knife crime impacts individuals and communities, the consequences of carrying or using a knife, and what to do if you are concerned about a young person, or if you yourself feel at risk of violence.

It also features a number of local people who have lived experience of knife and violent crime, including Kelly Brown, the mother of Rhamero West, who was stabbed to death in Old Trafford at the age of 16 in September 2021, and Matthew Norford, ex ganger member and founder of 1message.

"The saddest part is that these tragic incidents are preventable.

“We need everyone’s help to end violence amongst young people.

"Teachers, parents, guardians, friends, and extended family members can all play a vital role in preventing young people from becoming involved in knife crime by speaking out if they have concerns.

"Help and support for young people and parents is available.

“It’s also important for anyone who is tempted to carry a knife to remember that doing so puts you at great risk, and there are serious consequences to this decision.”

Ms Hughes said: “I hope everyone will join us in supporting this campaign which aims to encourage more people to step forward and report concerns they may have around knife crime or any other serious violence.

“Through the Violence Reduction Unit, organisations across Greater Manchester are working together to stop crimes like this being committed and to keep people in our city region safe.

"But we can do so much more if more people report incidents or concerns they have.

"It could be someone you know – and the best way to help them is to speak out.”

Greater Manchester Police’s knife crime lead, Superintendent Caroline Hemingway, said: "We all have a part to play in preventing knife crime, whether that’s talking to people about the dangers of it or stopping yourself from carrying a knife.

"The consequences are far-reaching and don’t just effect those that are directly involved in an incident.

“GMP continues to actively target those involved in knife crime, as well as educating everyone on the dangers of carrying a knife in the hope that we will see a reduction in incidents.

"Hopefully this video will start a conversation that develops into an understanding of the potential dangers and changes people’s mindset around ‘needing to carry a knife’.

“It’s vital that members of the public continue to report any information or intelligence that you may have, no matter how big or small, as this supports the work that GMP and our partners undertake in our fight against knife crime and allows us to take the necessary action to minimise the devastating impact it can have on our communities.”

Matthew Norford, CEO of 1Message and ex-gang leader, said: “I am really pleased that I am able to use my life experiences to help other young people that might be in difficult situations or involved in serious violence.

“The message I want to get across to any young person that sees something that’s wrong, might be in trouble, or knows a friend that’s in trouble, is don’t be scared to speak out and ask for help.

"Parents, teachers, social workers and the police are all there to help you.

"If you see something, speak out about it, you could save a life.”

The campaign launched on August 1, 2022, with key awareness messaging featuring across social media, other digital platforms and out in communities across Greater Manchester, reminding people that #SpeakingOutCanSaveALife

Visit #SpeakingOutCouldSaveALife website - Greater Manchester Violence Reduction Unit (gmvru.co.uk) to read more on the campaign and how you can report concerns and find support for young people.

If you are concerned about a young person - your son, daughter, nephew, niece, friend, or someone you know, speaking out about your concerns could save their life, or someone else’s. Speaking out can feel daunting, but help and support is available.