You are Here: Home » News » Aladdin — definitely not a wishy-washy production

Aladdin — definitely not a wishy-washy production 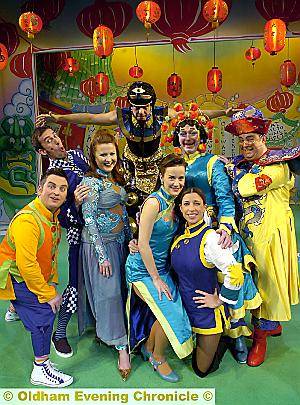 EAST meets West in a sparkling production of Aladdin — this year’s Christmas cracker of a pantomime at the Oldham Coliseum.

With cracks about Tommyfield Market and ancient lamps in Old Peking, the fun and laughter are pure vintage Oldham, served in plentiful dollops.

As everyone knows, Aladdin produces a magical world just by rubbing a lamp.

The strongest character was Abanazar, played by Andonis Anthonya wicked wizard, who is determined to marry Princess Jasmine.

The set was bright and colourful like widow Twankey’s outfits . . . including one resembling a red standard lamp.

Aladdin, played by Amy Rhiannon Worth, falls in love with the beautiful Princess Jasmine (Maria Watton-Graham) and, after a long battle with the Emperor (Howard Chadwick) he finally wins her heart over.

The pantomime was wonderfully organised and Aimee Thomas, who took the part of Slave of the Ring, kept the audience going with her traditional panto-style jokes.

There was lots of quick-fire humour and rapid scene changes keeping the audience on the edge of their seats — the glittering fairytale scenes particularly grabbed my attention.