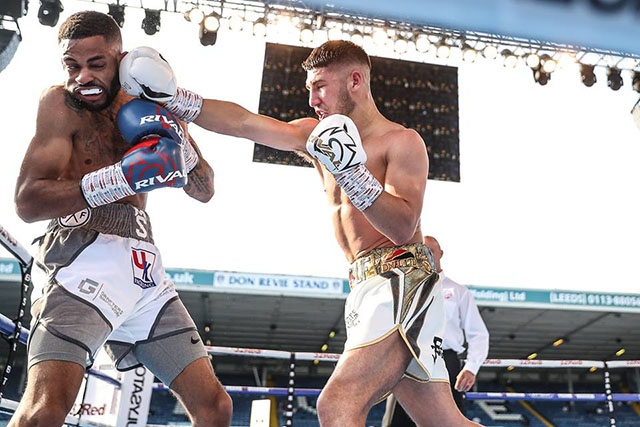 Danny Wright (right) in action against Mikey Sakyi at Leeds United's Elland Road stadium in May this year. Pictures courtesy of Karen Priestley

When Failsworth super-lightweight sensation Danny ‘the Wolf’ Wright steps into the ring at the Manchester Arena on Saturday, December 22, a long-standing dream will finally come true.

Wright, aged 22, has won all 10 of his professional fights so far since turning to the paid ranks two years ago.

A former amateur star, Wright is already making big noises on the pro scene and has been rewarded by manager Steve Wood and big-time promoter Frank Warren with a spot on the undercard of the massive Josh Warrington-Carl Frampton showdown in Manchester next month.

Wright, whose career has been guided from the start by Middleton-based Ben Lancaster, told the Chronicle: “I’m buzzing to have the chance to fight at the Arena, it is a dream come true for me.

“I’ve wanted to box there for years.

“I’ve missed out on a couple of chances to feature there in the past, but looking back, this bill is probably going to be the biggest of that lot.

“I was too young to see Ricky Hatton fight there, but I’ve been to a couple of the Anthony Crolla nights there and I’ve seen Terry Flanagan there because I did the training camp with him and got a ticket off him.

“Whether I’m going to be on early or not, I know I’ll get a good opponent.

“I’ve got a job to do first, but then I’ll be happy to soak up the atmosphere and really enjoy the night as a whole.”

September’s comprehensive points defeat of Zoltan Szabo at the Victoria Warehouse in Trafford Park was Wright’s 10th straight win, and already the confident fighter is looking towards potential title shots in 2019.

Many punters are tipping Wright for future glory in the fight game, with the man himself admitting he has high hopes for himself over the next couple of years.

“I’ll fight for any title that’s put in front of me,” added Wright.

“That might be an English, or a version of an international title.

“Whichever way we go, I’ll be ready for it.

“I’ve always said that by the time I’m 23 I’ll be wanting to look towards maybe the British title.

“In another year I believe I’ll be in a position where I can be pushing towards a major title like a Commonwealth or a British, certainly something around that level.

“Having said that I know I’ll need to be physically ready too.

“At the end of the day I am still only 22, and I know that when I’m 24 I’ll be completely different to where I am now. I will be a different animal.

“That’s the thought process at the moment – take my time, but I want to be pushed hard as well, and I will be because I’m in good hands with Steve and Ben.

“My career is definitely moving in the right direction.”

Wright is a decorated England international, who was both a junior and senior ABA champion.

His manager Wood reckons the unbeaten ace will have a major impact on the domestic title scene with just a couple more victories under his belt.

“Danny has been pro for a couple of years and breezed through his apprenticeship,” said Wood.

“We’ll be stepping him up this season though, and I’m sure he’ll rise to the challenge and put in some big performances.

“Danny has already impressed people in the game and been signed to a promotional contract by Frank Warren.

"We’ll be keeping him busy, though.”