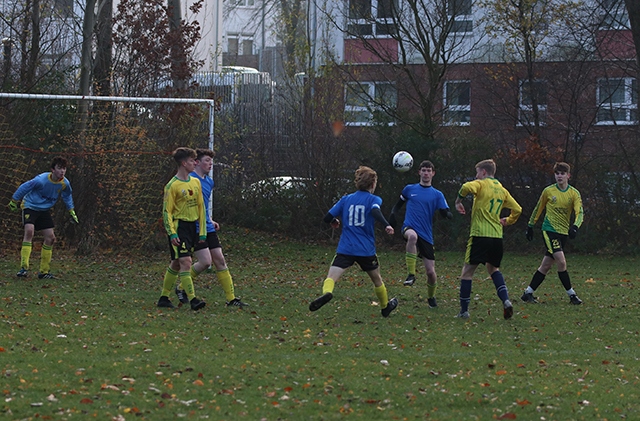 Chadderton Park under-19s Eagles took on the Cobras in a pulsating club derby which ended 3-3.

The Cobras took the lead after nine minutes following a good move, but the lead only lasted three minutes as Byron Smith fired home from the edge of the box after great work by Lewis Connell.

The Cobras regained the lead in the 42nd minute with a good finish, only for Smith to score his second of the game two minutes later when he got on the end of a Brandon Reavey free kick.

Into the second half and the Eagles were very wasteful thanks to some last-ditch tackles and some great saves from the Cobras ‘keeper.

The Cobras were also kept at bay with the Eagles ‘keeper Macauley Booth pulling off a couple of fine saves.

In the 78th minute, Smith went from scorer to provider when his through-ball allowed Will Greenhalgh to charge towards goal and fire home to make it 3-2.

However, just four minutes later it was level again when the Cobras bundled home following a corner.

It was also derby day for the under-15s as Chaddy Park Lions and the Eagles went head-to-head, with the Lions providing a dominating display as they ran out 7-1 winners.

Adam Belwassa opened the scoring after a great team move.

Lewis North then doubled the lead following a Kieran Akehurst cross, and Belwassa made it 3-0 when he scored his second goal of the game.

It was 4-0 when Lawrence Majeck scored a 25-yarder before half time.

Into the second half and it wasn’t long before it was 5-0 as Akehurst added his second of the game with a classy finish into the bottom corner.

The Eagles made it 5-1 a few minutes later after they put together a good move to create the chance.

However, the Lions soon extended their lead when some quick one touch passing from the midfield paid off when Kristian Walker fired home to make it 6-1.

Belwassa completed his hat-trick with a good finish as the game approached the final whistle.

Chadderton Park under-18s Lionesses were away at unbeaten Davyhulme Park and turned in a terrific performance.

Cameron Eastwood opened the scoring after just 80 seconds, before Lucy Reeves made it 2-0.

Reeves got her second after 18 minutes to make it 3-0.

Davyhulme grabbed a goal, but Lorna-Jo Holt made it 4-1 after 23 minutes with a long range strike and it was 5-1 soon after when Reeves completed her hat-trick.

Tara Phethean scored a minute later to make it 6-1 and Aaliyah Morton slotted home a penalty.

On the stroke of half time Eastwood scored her second of the game to make it 8-1.

Reeves terrorised the Davyhulme defence and she added four more goals after 53, 66, 67 and 76 minutes.

Holt completed the rout, adding her second of the game to make it a resounding 13-1 win.