You are Here: Home » News » Local Sport » Six out of six for in-form Dragons

Six out of six for in-form Dragons 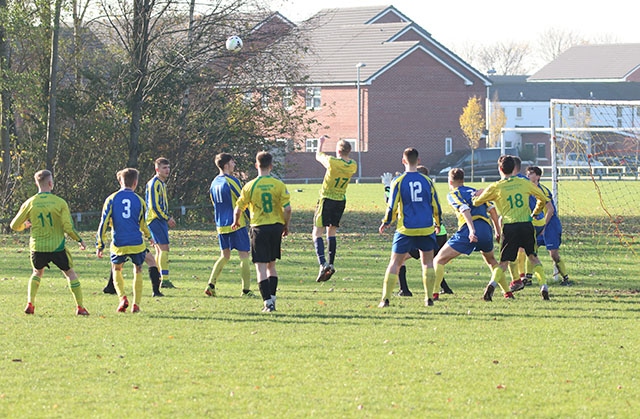 Chadderton Park under-15s Dragons made it six league wins out of six with a hard-fought 3-2 victory at Springhead Dragons.

Jaden Bradford opened the scoring, before Carlos Santos made it 2-0 following a great team move.

Springhead pulled one back before half time, before Santos scored his second of the game to move to make it 3-1.

With five minutes left Springhead made it 3-2 following a breakaway.

The depleted Eagles played some great football and put on a superb first half defensive display despite conceding after only six minutes.

The Eagles created a few chances in the first half, but couldn’t convert them.

The Eagles were hit with a double salvo in a nine-minute spell when Waterloo scored twice to make it 4-0.

With seven minutes left Lewis Connell played a short pass to Byron Smith, and he unleashed a 35-yard screamer into the top corner to make it 4-1.

It was derby day again in the Under-15s Premier League with the Chadderton Park taking on the Eagles.

The Lions took a well-deserved lead through Kristian Walker following the a great team move.

Adam Belwassa added the Lions’ second with a smart finish.

Lewis North added a third, and it wasn’t long before Walker added his second of the game to make it 4-0.

Walker completed his hat-trick with an absolute rocket of a shot from 30 yards to make it 5-0.

The icing was put on the cake when Walker scored his fourth of the game with another sensational team goal to make it 7-0 to the Lions.

The girls matched their opponents throughout the game, playing some great team football.