You are Here: Home » News » Local Sport » Oldham lady vice captain Charlie Wade produced the best golf round of her life to win by a massive 11-shot margin.

Oldham lady vice captain Charlie Wade produced the best golf round of her life to win by a massive 11-shot margin. 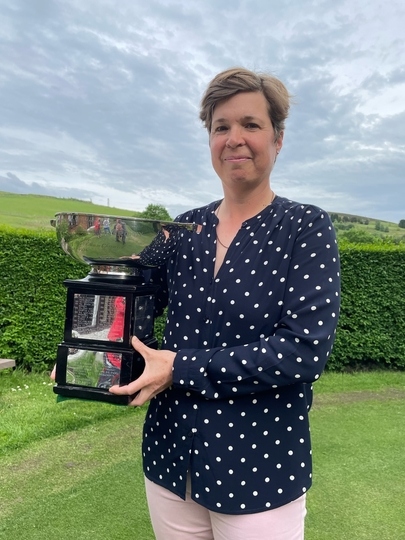 OLDHAM  lady vice captain Charlie Wade produced the best golf round of her life to win the 2022 Ladies Chronicle Cup... by a massive 11-shot margin!

Wade (48) was delighted by victory – her biggest result since taking up the game four years ago.

Wade carded four pars on the outward nine and despite a slight hiccup with a triple bogey seven at the difficult eighth it was 4s and 5s all the way home for an impressive card the rest could get nowhere near.

Wade, who works part-time in a solicitors, has been having lessons with veteran Manchester Golf Club professional Brian Connor and she couldn’t wait to text him a picture of herself with the prestigious trophy that has been played for between the females members of the five Oldham-area clubs for 98 years.

“I knew I had a good score going but I just kept going,” said Wade.

“I am just delighted to bring the trophy to Oldham… especially as so much work is being done at the club with the help of England Golf  to being more women to the sport.

Wade’s victory in the sunshine was in stark contrast to her debut in the tournament last year at Saddleworth... rain-soaked and miserable. What a difference a year makes.

It was a much closer affair for the minor prizes.

The afternoon nine-hole greensome was won by Brookdale’s Lynn Kershaw and Barbara Harrop (32).

The Chronicle Cup was presented by former Chronicle Editor David Whaley, secretary of the Oldham and District Golf Society and there was widespread praise for the way the Oldham club hosted the event and also for the Oldham Ladies Golf Association (OLGA) for maintaing the traditions of the event.