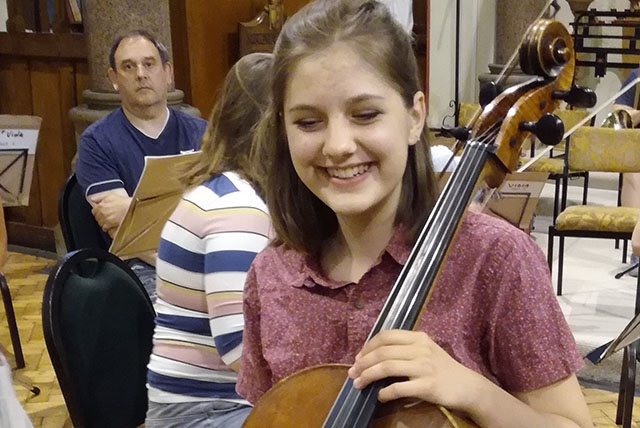 Taking place at St Paul’s Church in Royton, the concert, under the baton of the charismatic Marco Bellasi, was a celebration of youth and age.

The event had been included in the Greater Manchester Festival of Ageing, but the emphasis was definitely on youth.

The soloist, Lili Holland-Fricke, was judged Uppermill Young Musician of the Year, 2017, and so had been given the opportunity to play with the Orchestra.

It is not often that a concerto is the last piece played in a concert, but in this case the Orchestra had certainly saved the best until last.

Lili’s mastery of the cello was demonstrated in her superb rendition of the Saint-Saens Cello Concerto no 1.

Although Lili has been principal cellist in the Halle Youth Orchestra, this was her first time as a concerto soloist and is sure not to be her last.

The concert opened with a little-known and little-played Organ Symphony by French composer Alexandre Guilmant, with local organist Chris Price returning to demonstrate his prowess at the organ keyboards.

It was an interesting piece with a lot for the organist to play, but very much as a member of the orchestra, and not as a soloist.

It was a difficult balance to achieve and it worked well.

Meanwhile, in the middle of the performance there were two particular crowd pleasers – Schubert’s Unfinished Symphony and L’Arlesienne Suite no 2.