You are Here: Home » News » Community News » Mike's off on a Blackpool Night Ride, in aid of a terrific cause

Mike's off on a Blackpool Night Ride, in aid of a terrific cause 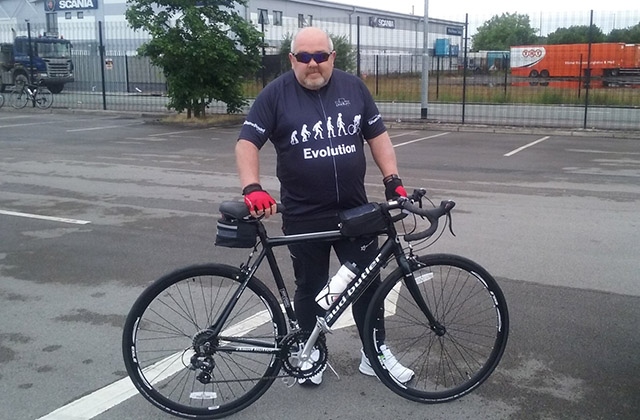 Fifty-one-year-old Mike Roberts is taking on one of the UK’s most iconic cycling events, the British Heart Foundation’s (BHF) Manchester to Blackpool Night Ride, to raise money for the charity’s life saving research.

In the space of two weeks in the summer of 2014, Mike had five incidents where he believed he was having a heart attack.

Only on the final of these incidents, when the pain was so severe, did he seek help.

His fear of hospitals and phobia of needles was so overwhelming that on each of the occasions he waited for the pain to pass and tried to carry onwith his life as usual.

The first occasion happened while he was at home watching TV one evening, he felt an immense pressure on his chest and pain in his jaw.

He thought he knew what it was immediately, having seen heart attack symptoms on TV shows and films, but he waited until the pain passed about 25 minutes later, and decided to take it easy for a couple of days.

Mike, from Moston, said: “I thought it was a one-off, I told myself that I’m still alive and I feel ok, but similar incidents happened a few more times over the following fortnight.

"The next was in my shed at home, then at my desk at work and then again while watching TV one night – each time I was dripping in sweat and had similar pain as the first time.”

It was the fifth occasion, while in bed one night, that Mike was forced to seek help. The pain was overwhelming and more severe that the other occasions, so he told his partner that he needed to go to hospital and she called an ambulance straight away.

When he arrived at hospital Mike had an ECG, a blood test for enzymes in his blood and an angiogram.

The blood test results were very concerning and after the angiogram, doctors immediately put in two stents into the same artery and two years later, in 2016, doctors put another two stents into different arteries.

Although it’s unknown what the episodes before the heart attack were, the doctors said how lucky he was to be alive and were not too happy that he hadn’t come into the hospital sooner.

Mike said: “I did my first charity bike ride six weeks after second lot of stents were fitted. The feeling you get when crossing the finish line is so great, I’m especially looking forward to the night-time element of this ride.

"I’ve been really keen to do something to fundraise for the British Heart Foundation.”

At midnight on Saturday (October 6), Mike and around 3,000 riders will set off from the Old Trafford Cricket Club in Manchester and take on the 52 mile challenge, heading for the glow of the Blackpool sea front and famous illuminations which will be left on especially for the occasion.

The BHF relies on the enormous generosity of its supporters to pay for its ground-breaking research into heart and circulatory diseases, including stroke, vascular dementia and conditions that increase their risk, such as diabetes.

In the Manchester area alone there are around 47,600 people living with heart and circulatory diseases.

Last year, the Manchester to Blackpool Night Ride raised £110,000 which will go towards helping to better understand how to prevent, diagnose and treat heart and circulatory diseases and beat heartbreak forever.

If you’re interested in taking part in this year’s event, visit: www.bhf.org.uk/M2B for more information or to sign up.

If you would like to support Mike’s fundraising, visit www.justgiving.com/fundraising/mike-roberts2018 and donate to the British Heart Foundation.