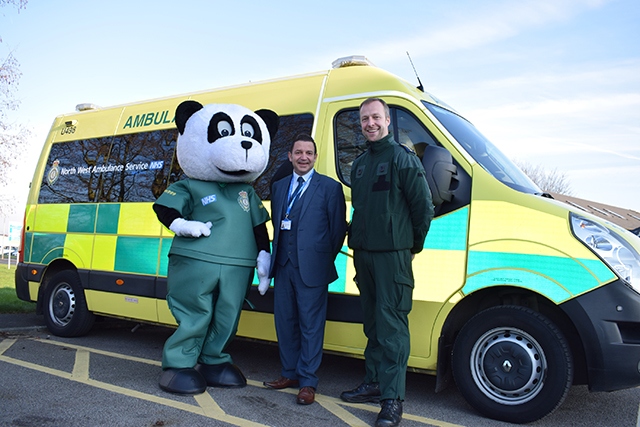 The North West Ambulance Charity funds lifesaving equipment, education programmes and other projects to benefit the health, wellbeing and safety of patients, staff and the wider community.

An NWAS charitable fund was first established in 2008 to allow legacy gifts and generous donations from the public, businesses and grant funders to be used effectively to support the work of the service.

In the last year, the charity has funded the installation of more than 100 defibrillators in public places.

Each defibrillator funded and installed increases the chances of survival for an out of hospital cardiac arrest from just 5% to over 75%, if used with effective CPR within the first four minutes of an arrest.

The charitable fund has now been developed into the new North West Ambulance Charity, and publicly launched with fresh branding, charity mascot Pandamedic, and a JustGiving page to boost fundraising.

With the support of the public, the charity will continue to fund vital lifesaving defibrillators, along with other initiatives such as schools education programmes, additional equipment and clinical training aids.

Charity funds will also contribute to extra health and wellbeing schemes to support ambulance service staff who work hard all year-round to be there for North West residents at their time of need.

The work of the charity is over and above the core, NHS-funded work of NWAS.

Charity Development Manager, Vincent Sherard-Bornshin, said: “The good-will of patients, the public, community groups and local businesses allows us to fund extra projects which can make a huge difference to so many people, both in the community and within NWAS.

“With the official launch of North West Ambulance Charity, we’re asking people to make a small donation through our JustGiving page and keep the charity in mind for any upcoming fundraising events or ideas.

"Any contribution, big or small, can help us towards our goal of supporting staff and saving lives.”