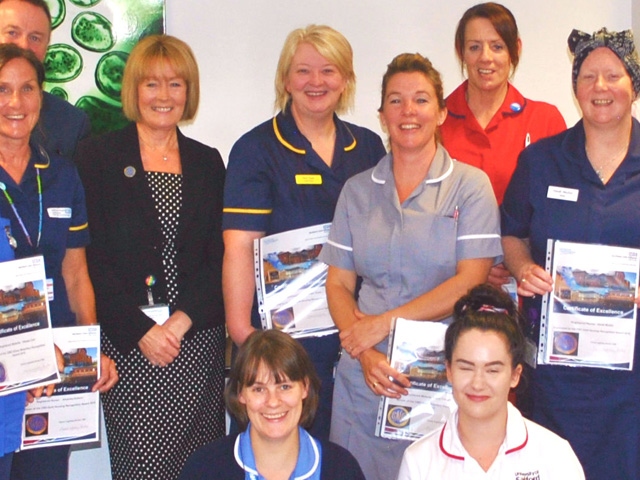 The Group Chief Nursing Officer at The Northern Care Alliance NHS Group (NCA) has honoured two nurses and two midwives by awarding them gold and silver awards for excellence.

'Saving babies lives' midwife Karen Clough won the gold award for midwifery, being part of the industry for years, she works at Oldham and North Manchester Care Organisations.

Karen has been described as fantastic and the height of professionalism.

Each winner was awarded a certificate and badge and gets to attend a thankyou ceremony attended by Group Chief Nursing Officer Elaine Inglesby-Burke CBE.

The group executives decided to introduce the awards for the NCA, which brings together Salford Royal NHS Foundation Trust and The Pennine Acute Hospitals NHS Trust.

The NCA Nursing and Midwifery Awards recognise and award individuals who have excelled in their performance by the giving of a silver or gold recognition badge and certificate.

The gold badge and certificate are awarded for outstanding achievement and exceptional/significant contributions by an individual with a distinguished career in nursing or midwifery.

The silver badge and certificate are awarded for performance that goes beyond the expectations of the job.

Elaine Inglesby-Burke CBE, Group Chief Nursing Officer at The Northern Care Alliance NHS Group said, “I am delighted to make these four awards to honour the hard work, dedication and amazing standard of care each of these professionals brings to our organisation.

We have introduced these awards for the first time this year and each year we will choose four new worthy winners.

It is my way of saying thank you to each and every one of them. They are all well-deserved winners.

Elaine added, “The NCA Nursing and Midwifery Awards gold award recognises excellence in those staff who have gone beyond their role and are leaving a legacy of excellence in their field. The silver award is for an individual who is beginning their nursing journey, but who has excelled and gone above and beyond in practice.”

Gold winning nurse Amanda Hobson, Lead Nurse for Adult Community Services at Salford Care Organisation, said, “To receive such an award has made me feel proud and privileged to be a nurse serving the patients and families of Salford.”

In all, the NCA employs over 7,000 nurses and midwives at hospitals in Salford, Oldham, Bury, Rochdale and North Manchester.