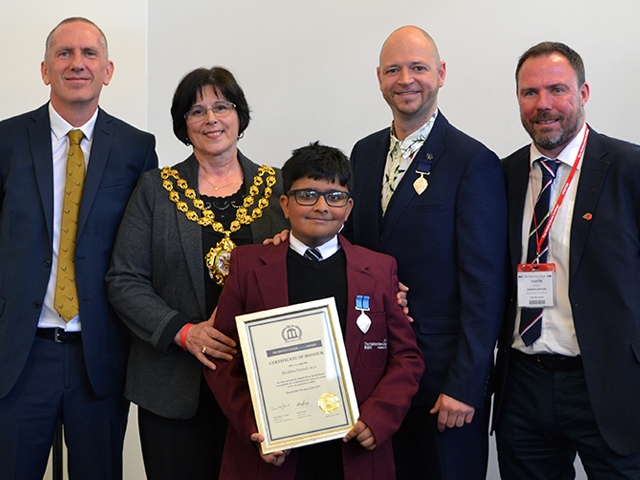 Brave Ibrahim Yousaf has been presented with a British Citizen Youth Award after being nominated earlier this year.

Due to his ill health, Ibrahim has been presented with his Medal, before the event at Parliament in October, at his school, The Hathershaw College.

Presenting Ibrahim with his prestigious honour was The Mayor of Oldham, also present was Mr McEntee, Ibrahim’s headteacher and Reece Ryan BCAc, Head of Ambassador Programme at the BCyA.

The young man from Oldham, Greater Manchester has been recognised for his tireless efforts to raise money for good causes, despite facing many health issues of his own.

Ibrahim has been selected to receive one of only 30 BCyA medals this year in recognition of his fundraising and awareness campaigns.

Ibrahim, aged 13, has suffered from health issues from a very young age and in the last year, his condition has become even more challenging.

He is on daily medication and under the Royal Manchester Children’s Hospital for his ongoing treatment.
Despite this, Ibrahim has been trying to live a normal life and has been selflessly helping others by taking part in various fundraising events.

For nearly 12 months, Ibrahim has been helping 10 charities within his local community.  He used social media and donated all his free time to help charities such as RMCH, Maggie’s, Dr Kershaw’s Oldham Foodbank, Oldham Street Angels and Spoons.

Not just content with raising awareness, Ibrahim has raised over £4,000 to help these charities.

Ibrahim’s proud mum said, “We are so proud of Ibrahim, it is a wonderful honour to see his fundraising recognised in this way, we are grateful to BCyA for breaking with tradition and allowing a medal to be presented outside of the Palace of Westminster.  Ibrahim is not well enough to travel very far, so this is really a special day for him”.

The British Citizen Youth Award in association with Specsavers recognises the extraordinary contributions made by young people to society, charities and communities.

Dame Mary, Co-Founder of Specsavers and Patron of the British Citizen Youth Award, says, “Ibrahim’s story is so inspiring; his dedication to raising money for charity while facing significant challenges of his own makes him a very worthy recipient of this award and a fantastic role model for his peers.”

Nominations for this year’s British Citizen Youth Award are now open for all children who will be under the age of 18 in October 2019.

Those selected will be invited to receive their medal at a presentation being held at the Palace of Westminster this October.