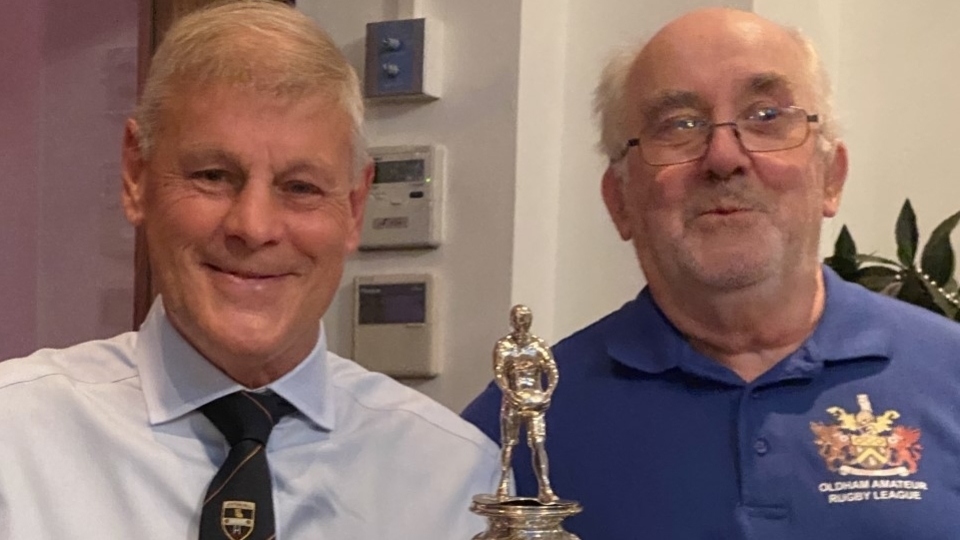 Reunion organiser Bob Norbury, a talented full-back in the 1985 Cup-winning side (left), is pictured with Phil Bradbury

Amateur Rugby League's all-embracing community spirit shone through at a function in Oldham on Saturday night when more than 30 former players of the long-gone Fitton Hill club met for an emotional reunion.

Formed in 1964 and providing a great sporting environment for young Oldham men until it folded in 1996, Fitton Hill celebrated its 21st birthday by winning the local league's prestigious Standard Cup with a 9-8 Final triumph over Shaw at Watersheddings in 1985 - the biggest day in the club's history.

The reunion dinner at the Blue Tiffin Indian Restaurant was based on that never-to-be-forgotten day and there were more than a few tears in more than a few eyes when the old timers, most in their late fifties and sixties, turned back the clock 36 years with an emotional rendering of "Blue Is The Colour" - the club song.

A highlight of the evening was the surprise appearance of Oldham Amateur League secretary Phil Bradbury with the famous Standard Cup, creating even more memories of the big day in 1985 when a cheeky try by stand-off Damian Chadwick with only nine minutes left gave Fitton Hill its biggest-ever prize in front of a crowd of several thousands.

Our picture shows 71-year-old reunion organiser Bob Norbury, a talented full-back in that 1985 Cup-winning side (left) with the trophy and Phil Bradbury.

Another highlight was the moment Bob handed over a cheque for £550 to Shaun Gartland of the rugby league charity SG6 (The Stephen Gartland Foundation).

The £550 were proceeds from sales of a Fitton Hill book by former chairman Malcolm Woodhead and John Hankin, which traced the club's history.

SG6 was launched in 2016 - in memory of the former Swinton, Rochdale and Oldham stand-off Stephen Gartland (No 6), who died aged 45 after severe depression.

It provides help and financial support for anyone who needs it.

Said Bob: "It's a great charity and one we were delighted to support.

"We should have held this event in 2020, just 35 years since we won the Standard Cup, but we had to postpone it twice because of Covid.

"A big thank-you to Phil Bradbury and the Oldham Amateur League for bringing in the Cup that holds such wonderful memories for us and also to The Blue Tiffin, who looked after us royally."

It was announced that anyone who had ever played for Fitton Hill, or had any official connection with the club, would be eligible for a commemorative club badge - an initiative sponsored by BCW Engineering, whose chairman and owner is former Fitton Hill player Andy Whelan.

Added Bob: "Thanks also to BCW.

"We intend to keep the Fitton Hill memories, and the spirit of the club, alive and kicking for as long as we can and we get a lot of help along the way."

For the record, four members of the 1985 Standard Cup Final side were present - Neil Taylor (prop and captain), substitutes Howard Hadfield and Mick Hardingham and full-back Norbury.

Among former players and coaches who made a name for themselves at pro level were wingers Mick Wilde and Geoff Munro, stand-off John Blair, ball-playing prop Kevin Flanagan (all Oldham RLFC) and Tony Martin, who went on to become one of the RFL's most senior and most respected touch-judges.