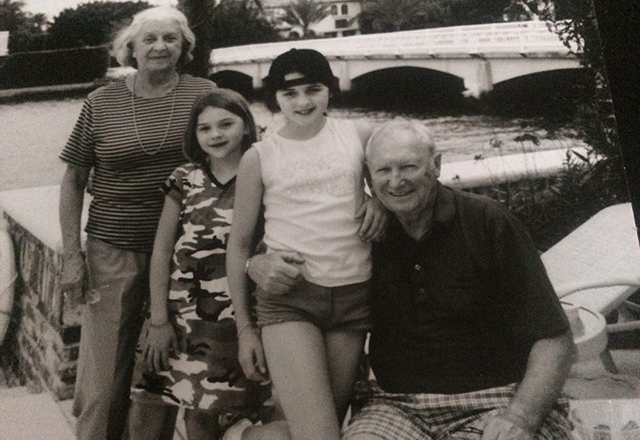 He died at home in Tonbridge, Kent on Friday, March 23 with his wife Nancy, by his side. He was 91 years old.

He leaves a daughter, Jill, daughter-in-law Caroline, five grandchildren who also include Katie, Victoria, Anna and Felicity, and five greatgrandchildren, all of whom will miss him dearly.

His son Peter (husband to Caroline), who was also a journalist, sadly predeceased him in December 2008.

Burrington was born on December 13, 1926 in Oldham and was the son of Harold and Laura.

He grew up in the town and although his career would see him move to London and then the US, he always spoke fondly of his northern heritage.

He entertained many with stories – a talent he would become known for – from his youth and days spent in Oldham and its surrounding areas.

Burrington showed profound loyalty to where he was raised, not least when he played a major role in the decision to open a printing factory there which meant hundreds of jobs for the local community.

Unlike his parents, who were practical people, his mother a mill worker and his father holding a number of jobs including that of a security guard, he soon found his creative spark in the art of writing.

His talent with words soon became apparent and he was encouraged by several teachers who realised his great potential.

It wasn’t long before Burrington was sending in stories to his local newspaper, the Oldham Chronicle.

His first breakthrough was a report on a German plane which had crashed in nearby fields. Its pilot and other crew had hidden in a nearby abandoned barn and Burrington seized the opportunity to make it his first significant piece to be published.

He continued to find local stories and get them published using the name of his father, Harold.

On the day he was called to the paper’s office to collect a pay packet, the editor handed it to his father who had accompanied him to the Chronicle’s headquarters.

The editor’s expression was one of shock when he was told it was the young boy standing in front of him who had been submitting all the copy and not Harold, whom he had naturally assumed had been the writer.

Burrington officially began his career in journalism in 1941 at the Chronicle which would teach him the basics of how to run a newsroom. He served in the Army from 1944 to 1947 before returning to the paper as a sub-editor.

His increasing enthusiasm and outstanding ability to realise how to make a good story into a great one saw him go on to take a post at the Bristol Evening World and then the Daily Herald.

He remained with the Herald as it became The Sun, but moved to the Daily Mirror as assistant editor in 1970. He went on to become deputy editor of the Sunday People in 1971, associate editor the following year and finally editor from 1985 to 1988. He was called upon to take on this role again in 1989 for the period of a year.

At a time when journalists still formed the boards of such newspapers, Burrington held a large number of posts within the Mirror Group and was later appointed Chairman.

He then got the opportunity to show off his talents in the US when he was offered a job by Atlantic Media, which meant he was based just outside the city of Miami for a number of years.

Throughout his career he met and worked with a number of journalists who today have made it as some of the country’s top authors, editors and politicians.

Alastair Campbell, the political aide, author and journalist met him early on in his career when Burrington held the position of editor of The People.

On hearing of his passing, Campbell said: “My main memory of Ernie is when we were being interviewed for The Mirror training scheme back in 1980.

“We had to be interviewed by all the top brass across the group. When I was with Ernie he asked me what paper I wanted to work for and I have no idea why but I said The Guardian. I then spent the next five to ten minutes wondering why on Earth I had said that.

“First, it wasn’t true and second, I was being interviewed at The Mirror by the editor of The People. After a while I said ‘Sorry can we wind back. I said The Guardian. I don’t know why because it’s not true. The only paper I want to work at is The Mirror.’ ‘I’m glad you said that,’ he said.

“I have often wondered whether that swung it for me and whether if I hadn’t corrected that I would not have made it.

“After the training period was over two years later one of the first batches of work I got was working for Laurie Manifold on the ‘Man of the People’ column. So, I came across Ernie again. He was always really nice to talk to and a total pro.”

During his time in Fleet Street, Burrington lived in Farnborough Park in Orpington where a couple by the name of Philip and Pauline Harris became his new neighbours.

Burrington and Harris soon struck up a close relationship, first because of the influential positions they held in their sectors, Burrington at this stage an established Fleet Street editor, and Harris a successful businessman with a retail portfolio including Carpetright and Harveys.

The pair soon found they also had a common trait in their senses of humour. While Harris may have believed he had the upper hand as he put Burrington in comical situations on their holidays and evenings out, there was certainly the belief Burrington was all too happy to play the fool.

The friendship became so close that Harris soon not only asked but expected Burrington to speak at the increasing functions he held as his businesses flourished and interest in the political world increased.

Harris was happy to be the butt of Burrington’s jokes as long as it kept guests entertained and the pair were inseparable for years to come.

After Burrington suffered the stroke shortly before his death, Harris visited him in hospital and when he returned home under the watch of his carers Harris was on the phone each day checking for progress. He remained a loyal friend until the end.

Despite his reputation as being a formidable editor at a time when it’s been suggested tabloid journalism was at its best, I will personally remember my grandfather as a gentle, fun-loving man full of mischief and ideas. If I ever needed guidance or advice he was always only a phone call away.

I know my sisters share the view that some of our greatest family moments would include visits to his and my grandmother’s home in Florida where his energy for days out, card games at home and adventure activities was endless.

Back on English soil my own personal relationship with him involved trips to football matches to watch our beloved Manchester United, the team also followed by his son and my father, Peter Burrington, as well as rounds of golf most usually at Poult Wood which is local to his final home in Tonbridge.

His political views changed over the years, but he was always a great backer of the ‘underdog’ and a champion of opportunity for all.

He kept a photograph on his wall, of the first-ever black person who worked in a building in London when he was editor of The People.

In his later years I asked him why he had voted for a particular lady in a set of local elections.

He replied: “I hadn’t researched any of the candidates and she was the only woman, so I thought she was worth a shot!”

A service will be held on Thursday April 19 at 11.30am at St Bartholomew The Great, West Smithfields. This will be followed by refreshments at the Punch Pub, Fleet Street.