You are Here: Home » News » Education » School Games kids are going for it!

School Games kids are going for it! 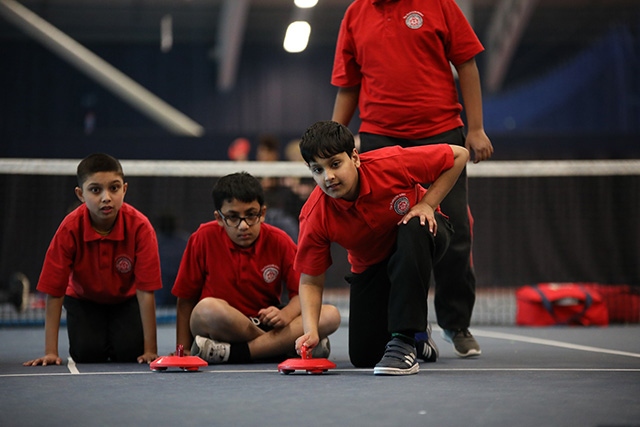 Oldham came away champions in the Year 7 girls' netball, where Hulme Grammar School were victorious.

The following teams represented Oldham at the event:

World class facilities from around the county were utilised for the games, including the National Cycling Centre, Eastlands Athletics Arena and the National Basketball Performance Centre.

Nearly 150 young leaders came together to form the School Games crew this year, including a number from Newman College from Chadderton.

They underwent training before the event, with some gaining qualifications to ensure they could help deliver the hockey competition with Brooklands Hockey Club.

Responsibilities of the volunteers on the day included refereeing, officiating and team management.

The Games also welcomed Gymnastic star, Beth Tweddle MBE and Alan Newton, an Olympic bronze medallist at the Cycling Competition in Helsinki in 1952, who were both on hand to inspire the young athletes.

Beth helped to deliver the gymnastics competition with her company Total Gymnastics.

The School Games Organisers across Greater Manchester have organised and delivered local competitions with 140,751 individuals having taken part in this academic year so far.

Matt Johnson, Deputy CEO at GreaterSport, organisers of the Greater Manchester School Games said: “What a fantastic day of school sport competition, the event provides a terrific platform in which these 2,000 young people can showcase their talents at world class venues.

"What I particularly enjoyed is seeing the passion and enjoyment from not just the competitors, but the teachers, parents, volunteers and competition deliverers too, this started at the opening ceremony and continued throughout the competitions.”

A full list of results and schools who took part as well as photographs from the day can be found at www.greatersport.co.uk/schoolgames.