You are Here: Home » News » Education » Students 'pass out' in style

Students 'pass out' in style 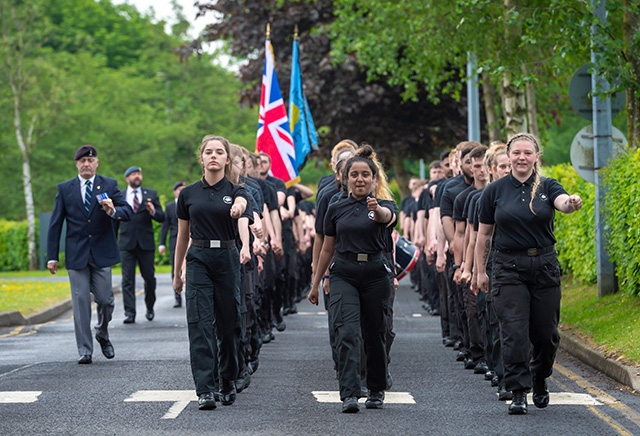 The 'passing out' parade at Hopwood Hall College

Hundreds of Hopwood Hall College’s Uniformed Public Services students signed off their 2017/18 academic year with their ‘Passing Out Ceremony’.

The parade acts as a send-off for final year Uniformed Public Services students moving into careers in uniformed services or university and an end of year ceremony for students progressing onto another level at the College.

Two-hundred students - including many from Oldham - marched onto the parade ground to the beat of a military marching band at the Middleton campus of Hopwood Hall College.

Guests were then treated to a series of impressive student displays showcasing the skills they had learnt whilst on the course including their famous drill exercise.

Mike Bruns, UPS Programme Manager at Hopwood Hall College, described the rewarding experience of seeing his students progress onto the next stage of their careers.

He said: “Our Passing Out Parade is a symbol of our learner's hard work throughout the academic year.

"The staff and the students have traditionally celebrated their achievements in this way as Hopwood Hall College has a high percentage of students who progress into careers in uniformed services.

"This was in evidence by the representation of past students, the Army and Royal Navy, the RLNI and the Fire Service on the day.”

The Uniformed Public Services department at Hopwood Hall College prepares young people for work in a wide range of Public Services, including the Police, the Fire and Rescue Service, the Ambulance Services, the Army, Royal Navy, Royal Marines and Royal Air Force, the Prison Service or HM Customs and Excise.

She said: “Being in the fire service is always something I wanted to do from a young age, so joining Hopwood Hall UPS was the best step I could take towards doing this.

"Before coming to college I had always been quite shy, the UPS course helped me grow as an individual and gain the confidence I need to move towards my career goal.”

Similarly, Louie Thomas, now a Royal Marine Commando, expressed his thoughts on Hopwood Hall College and how it benefited him.

He added: “The UPS course at Hopwood Hall College fully prepared me both physically and mentally for my dream job as a Royal Marine Commando.

"The units I studied also gave me the knowledge to excel above my colleagues.

"The staff always had a lot of confidence in me despite being nervous about my Royal Navy assignments, they all told me I would do well and now I wear my Green Beret with pride!”