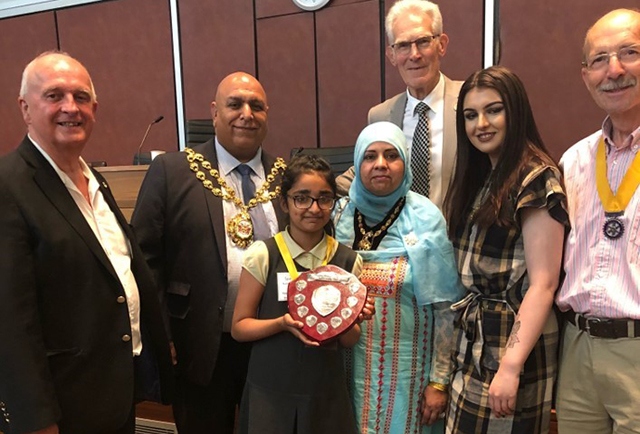 Children from more than 20 primary schools converged on the Council Chambers in the town centre to compete in the annual Oldham Spelling Bee competition.

After winning similar competitions in their own schools - more than 4,000 originally entered - pupils qualified for this year's Spelling Bee finals showpiece.

Welcomed by the worshipful the Mayor of Oldham, Cllr Javid Iqbal, the Mayoress Tasleem Akhtar and the Youth Mayor, Amber Powell, the finalists were congratulated on their achievement in getting this far and then engaged in a hard-fought sudden-death contest to find the eventual winner.

This was Umme-Kalsum Tanveer, a Year 5 pupil at Broadfield Primary School.

Runner-up was Tanzeela Mahmood, a Year 6 pupil from Alexandra Park School, who will move to the Blue Coat School in September.

Sponsored by Madaleine Lindley Ltd and the Rotary Club of Oldham Metro, the Oldham Spelling Bee is believed to be the first in this country.

Pupils are given a list of words to learn - age appropriate and often linked to the National Curriculum - and then asked to spell one set in a context which makes it understandable.

Though still rare in the UK, Spelling Bees are a national contest for pupils in the United States.

The Oldham Spelling Bee was started four years ago at St Hugh's CE Primary School in Holts to help pupils get to grips with the tough, new spelling, punctuation and grammar curriculum.

It proved so successful there that it was opened up to other schools two years later.