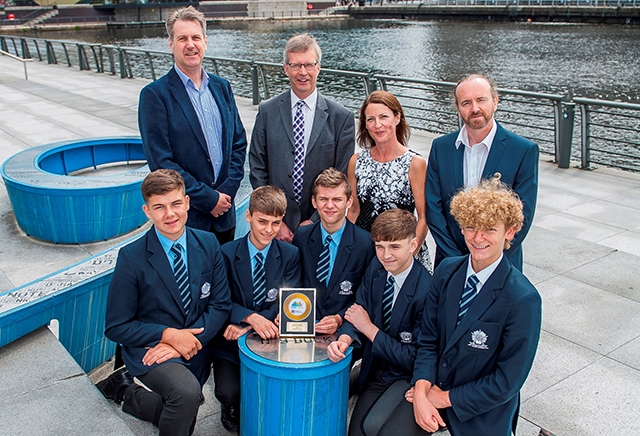 Dozens of schoolchildren have literally pedal-powered their way to success in a ‘Clean Air Day’ awards event by generating green electricity with specially adapted bikes.

Students from 21 shortlisted primary and secondary schools were invited to MediaCityUK to find out the winners of a video and radio advert competition to drive home the dangers of poor air quality.

Pupils and teachers powered up a sound system, projector and lighting in a marquee – using 12 bicycles connected to a large rechargeable battery – to listen to and watch the commercials before the winners and runners-up were announced.

It featured a footballer who suffers an asthma attack due to air pollution asking the crowd to travel to the match on foot or by bike rather than driving.

St Joseph the Worker RC Primary School in Irlam was the runner-up.

Saddleworth School won the secondary schools' title, with its entry contrasting the effects of poor air quality with simple changes people can make to their everyday life to help reduce air pollution.

Winners and runners-up have all received cycling equipment vouchers, and all pupils whose entries were shortlisted have received a walking and cycling goodie bag.

Nik Jackson, Saddleworth School’s Head of Media Studies, said: “The Media Studies department is new for the school, so winning the secondary schools award has set us up well for the future.

“It’s been a great experience for the students, who really enjoyed the workshop run by Collaborate Digital and it’s helped develop their skills.”

Andy Burnham, Mayor of Greater Manchester, said: “No one in in Greater Manchester should be breathing air that’s harming their health. Air pollution is contributing to thousands of hospital admissions every year and can affect young people more severely than adults.

“Everyone needs to do something to clean up our air and to have that message delivered in so many creative ways by some fantastic radio and video ads made by our young people is very impressive.

“Congratulations to all of the schools which have taken part in the competition and I’m really pleased that they’ve been so enthusiastic in raising awareness of air pollution as one of our most important challenges.”

As part of the Clean Air Day drive, TfGM held air quality workshops with more than 500 children in schools in all ten districts of Greater Manchester and received 137 competition entries.

Any schools who want to talk to TfGM about air quality in the new school term can contact: airquality@tfgm.com