You are Here: Home » News » Education » Inspirational Ben is a big hit at Oasis Academy

Inspirational Ben is a big hit at Oasis Academy 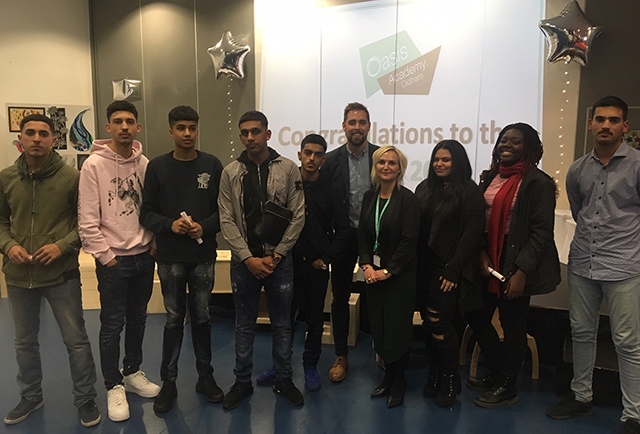 The Year 11 awards presentation evening at Oasis Academy Oldham featured a very special guest who knows a thing or two about staying power!

Aiming to add a little extra inspiration to the Oasis students on their special day was charity runner extraordinaire Ben Smith.

Bristol-based Ben, aged 36, made headline news two years ago when he battled a back injury on his way to completing an incredible 401 marathons in 401 days.

Ben began his charity attempt – in aid of Kidscape and Stonewall - on September 1, 2015 and ran 284 consecutive marathons in 284 days.

He then developed an umbilical hernia which forced him to stop for 10 days to recover, before resuming and making up the lost mileage.

After raising a whopping £330,000 for his two nominated anti-bullying charities, Ben later won a prestigious Pride of Britain award.

Ahead of the exciting awards presentation ceremony at Oasis, Ben told the Chronicle: “I never ever thought I’d end up coming to events like this.

“It’s really good, though, because our initiative – The 401 Challenge - do a lot of work in schools, all around the country.

“We’ve done over 300 events now, trying to inspire the younger generation that really, anything is possible.

“A lot of people will tell you things in your life that you can’t do something, but you can figure out what makes you happy in life and nothing’s going to stop you.”

Ben’s website – www.the401challenge.co.uk – will soon be relaunched with news of lots more events and fund-raisers up and down the country.

Details of a very exciting new international challenge/project are also set to be revealed in mid-December.