You are Here: Home » News » Education » Mr T drops in at Clarksfield Primary! 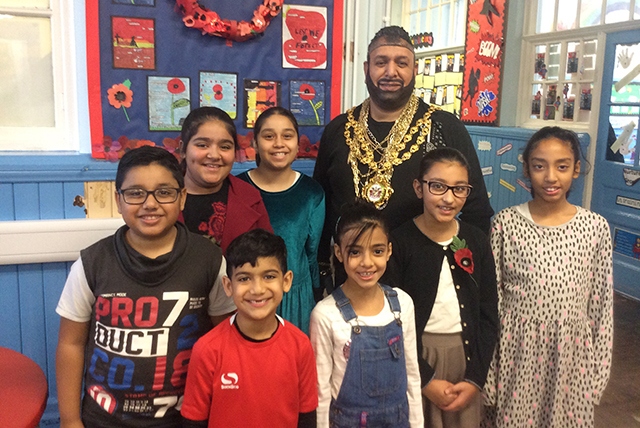 The Mayor of Oldham, dressed as Mr T, with pupils at Clarksfield Primary

Pupils were in for a treat when the Mayor of Oldham, Councillor Javid Iqbal, visited Clarksfield Primary School, dressed as Mr T (from the 'A' Team).

As part of Clarksfield School’s commitment to supporting local charities, the school participated in the Mayor’s charity appeal (#Mayors1000) by organising a whole school non-uniform day, and in return, the children and staff generously donated to the appeal.

Councillor Iqbal has set himself a target to inspire 1000 people, businesses, schools and organisations to raise £100 each for the Mayor’s Appeal Fund during his year in office.

Councillor Iqbal delivered a short talk, in both KS1 and KS2 assemblies, to explain his roles and responsibilities as a Mayor and why he has chosen to support his nominated charities. 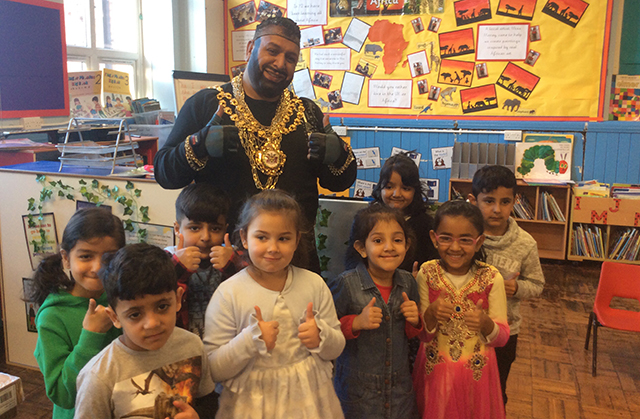 After the assemblies, he was given a special guided tour of the school by representatives of the School Council; there were opportunities for children and staff to take photos with the Mayor all dressed up!

Mr Khan, Assistant Headteacher and Community Hub Lead, said: “It was a tremendous honour to have the Mayor of Oldham visiting Clarksfield Primary School.

"The short assembly he delivered was both motivational and inspirational.

"As a school community, we raised £185 for the Mayor's appeal.

"Yet again, it's another fantastic example of the children, parents and whole school community working together to raise money for local causes."