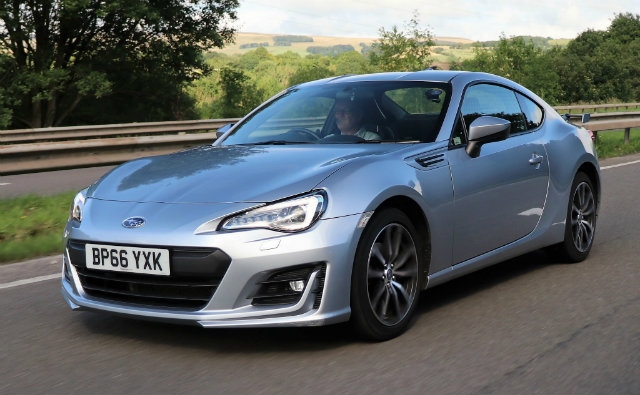 If you’re after a driver-focused, rear-wheel-drive , 2+2 coupe for under £30,000 then you  could do worse than settle on the Subaru BRZ.

You may be tempted to bust your budget slightly for a different badge and go for the Subaru’s stable mate, the Toyota GT86 but if you lean toward performance rather than comfort then I wouldn’t bother as the Subaru is slightly firmer-sprung and therefore more in-keeping with the ethos of being a “driver’s car”.

Born out of an alliance between Toyota and Subaru, the GT86/BRZ has more Subaru DNA in its make-up as its entire drivetrain - including the 2.0 litre, 200PS Boxer engine - is pure Subaru. And that’s no bad thing as Subaru have been building strong, performance-focused engines and gearboxes for many years now.

The Subaru BRZ is a low-slung sports car with the classic lines of a long bonnet, 2 doors and a stubby rear, with a fairly long wheel-base that helps the BRZ handle so well.

Inside you’ll find a smaller, sportier multi-function steering wheel and the addition of Subaru’s Starlink infotainment system. There is also more leather stitching around and some materials feel more upmarket than before. The addition of a 4.2in TFT trip-display that can show G-Force and torque-curve is welcome.

The interior remains the weak spot though as it looks a little dated despite the tweaks and doesn’t compare well to the hot-hatch brigade such as the Volkswagen Golf GTI and the fun-packed Ford Fiesta ST which both feel more current.

They can’t beat the BRZ when it comes to driving position though as the little Subaru makes you feel like you’re sat in a real road-racer. It’s low with a legs-straight-out position and the steering wheel and pedals are perfectly placed to get you wanting to lean back into those wrap-around seats and head for the nearest A-road. The nearest comparison is probably the Mazda MX-5 RF 2.0 litre which is just as much fun but doesn’t have 2 extra seats in the rear.

Actually, the Subaru BRZ doesn’t have 2 extra seats either, really. The rear seats are more like a soft, large parcel shelf where you lay your sports bag and racquets. At a push you could get a couple of people in there so long as they were Jimmy Krankie-sized.

The boot, however, is a decent size at 243 litres while, rather surprisingly, you can fold down the rear seats to give you a whopping £1,270 litres. So, pretty practical for a sports coupe then.

You won’t be considering a BRZ purchase for its creature-comforts though – no, you’ll be focusing mostly on the driving experience and it’s here that the Subaru excels.

If you believe that out-and-out speed is what makes for a great sports car than you may need to look elsewhere as the BRZ will get embarrassed by most hot-hatches out there today - but maybe only in a straight line.

The rear-wheel drive, non-turbo BRZ will hit 60mph in a modest 7.6 seconds – which isn’t pedestrian by any means but the front-wheel drive, turbo Ford Fiesta ST will manage it in 6.9 seconds. Does it matter? Unless you’re drag-racing at Santa Pod, no not really and if you think it does matter then you are missing the point of the BRZ altogether.

Because there is no turbo, the Subaru’s acceleration is linear without that sudden shove in the back. You get down the road quickly but it just feels more controlled, less frantic than in some hot hatches and once you get used to the fact that you need to keep those revs in the sweet-spot then the BRZ is immensely rewarding to drive.

It sounds pretty good too when you hit the higher revs but doesn’t grate when you’re just pootling around town and even on the motorway the BRZ is quite a relaxed cruiser with hardly any road noise from its, relatively, skinny 215/45 profile 17in tyres.

Damping is gauged to be on the “entertaining” side without knocking your fillings out and even on the rougher roads I found the ride to be perfectly acceptable with only the bigger road imperfections causing a bit of a judder through the chassis and steering wheel.

Press on and the excellent chassis comes into its own, helped enormously by the Torsen limited slip diff while the sharp throttle response and rifle-bolt action of the gearstick will have you smiling not just from ear to ear but from A to B too. In damp conditions you can shove that rear-end out quite easily as the skinny tyres will lose traction – but that sort of thing is best saved for the track.

Choosing which Subaru BRZ to buy is simple – there is only one model, the SE Lux (£26,495 OTR) although you can have it as a 6-speed automatic if you want to miss the point entirely.

Inside there are heated seats, leather and Alcantara sports seats, Subaru Starlink Infotainment with 6-speakers, a 6.2 touchscreen, voice recognition and Bluetooth connectivity. There is also dual-zone auto air-con and heated door mirrors.

If you want sat-nav you’ll have to pay an extra £1,250 for a Pioneer system and if you really must have the auto gearbox, it’ll cost you £1,500 to ruin the experience.

I would struggle to choose between the Subaru BRZ and the Mazda MX5-RF though. Having spent a week in both it would have to come down to if you occasionally needed an extra pair of seats or if you really wanted a folding-roof. Both are a joy to drive and both look the part. I think the Subaru wins by a nose though because if feels roomier than the Mazda which can feel a little “closed-in”.

One things is for sure though when you buy a Subaru BRZ - prepare for wanting to “just pop out for a quick spin” on a regular basis.