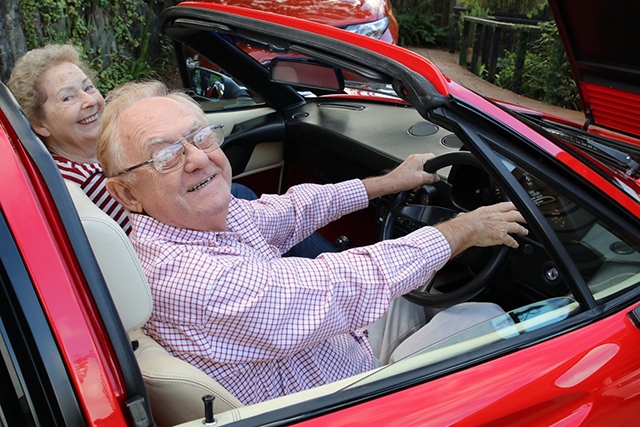 An Ashton man has told how he’s beaten prostate cancer after traveling to Europe for pioneering treatment.

And he’s also changed the opinion of sceptical family members - who feared he'd been ‘scammed’ - in the process.

Although Proton Beam Therapy - a unique form of tumour-fighting radiotherapy - has been available at The Rutherford Cancer Centre in South Wales since earlier this year, Keith Hill is now healthy and well having undergone treatment in Prague, Czech Republic.

After successfully combating the disease, drastically reducing his PSA levels, he's urging other men to be aware of what the therapy can offer.

Keith, an 82-year-old grandfather who recently emigrated to live in Queensland, Australia, revealed: “Since returning from Prague I’ve resumed check-ups with my urologist, who has confirmed excellent medical results.

“If it hadn't been for an article I'd read about the therapy, I would have never have sought it out myself. And now I want to share my experience with others so that I can make a difference to other lives.”

Keith, who lives with wife Sadie (76), first discovered there was an issue with his prostate in November 2014 following a routine PSA test.

And raised levels, discovered through a simple blood test, can indicate a tumour.

Keith's PSA level sounded alarm bells when it initially hit 6.4 – above the 'normal' reading of 4.0 or below – and it reached 11.4 by the time he received private treatment in Prague.

An MRI and biopsy followed which confirmed the worst – he had prostate cancer.

Sufferers often experience tell-tale symptoms, such as an urgency to urinate at night or erectile dysfunction.

But Keith said: “I never had a single symptom. I would never have even known something was awry had it not been for my GP.

“I didn't have a clue. And I had to start thinking about how to tackle it.”

The former international logistics manager for printing giants Xerox - who retired to live in Queensland in 2007 - was left with two choices.

His urologist said he could either have the prostate removed – a procedure which involves the risk of harrowing side-effects like incontinence and impotence – or he could 'watch and wait', and have PSA tests every six months to see how his illness developed.

Keith said: “I was told I was expected to live for another 10 years.

"But I still wasn't satisfied with that. I started to do my research online and see what other options were out there.

“I didn’t have a clue but persistence did not abandon me.

“And that's when I first learned about proton therapy. I wanted to destroy my cancer.”

Unlike traditional X-ray radiotherapy - such as intensity modulated radiotherapy (IMRT) - proton therapy uses an accelerated ‘pencil beam’ of positively-charged particles, travelling at 100,000 miles per hour, to target the area with pin-point accuracy.

The x-rays used in conventional radiotherapy pass all the way through the body, which has the risk of damaging sensitive tissues around and behind the tumour site.

Whereas, in proton beam therapy, the particles stop at the tumour, reducing radiation damage to nearby organs.

So in November 2017 Keith – who has two sons Steven (50) and Clive (47) – flew to the respected Proton Therapy Center in Prague for his treatment.

Yet not everyone was wholly convinced.

Keith admits: “My son Steven accompanied me to Prague. He said, 'I'm coming with you if you like it or not, because I think this is a scam. There's no cure for prostate cancer.'

“He wanted to see everything for himself. And thankfully he has been proved wrong. His opinion has changed drastically.”

Since treatment his PSA has now dropped to just 1.2, indicating he's now cancer-free.

As for the actual treatment itself, Keith added: “You feel absolutely nothing. On the first occasion I had it, I was laid down on the bed in front of the machine.

“Twenty minutes later, I said, 'Excuse me, but when are you starting?' And they replied, 'Well, it's all done now. We're finished.'

"I didn't even know they'd begun! The level of care is unbelievable.”

Keith had five 'fractions', or sessions, of proton therapy. Each session lasted 20 minutes.

He spent £17,300 on the proton therapy itself, plus travel and living expenses.

Justifying the expense, he laughed: “Well, I can't spend it when I'm six feet under, can I? And I do this in the hope that I can extend my journey.

“Most importantly, my mind is now free of the worry.

“You simply can't put a price on that as far as I'm concerned.

“And I would wholeheartedly encourage anyone else in my situation to explore their options.

“There's a prevailing attitude that alternative forms of cancer treatment should be viewed with real scepticism. But this notion needs to be challenged and changed.”

Between 2018 and 2020, the UK will see the opening of two high-energy proton beam cancer treatment centres run by the NHS - one at The Christie Hospital in Manchester and the other at London’s University College Hospital - at an estimated combined cost of £250m.

They’ll each be able to treat around 750 patients per year - just a fraction of those given a cancer diagnosis.

Dr Jiri Kubes, medical director of the Proton Therapy Center in Prague, said he expects to treat close to 200 patients from the UK this year.