You are Here: Home » News » Lifestyle: Music  » Cotton Clouds does it again!

Cotton Clouds does it again! 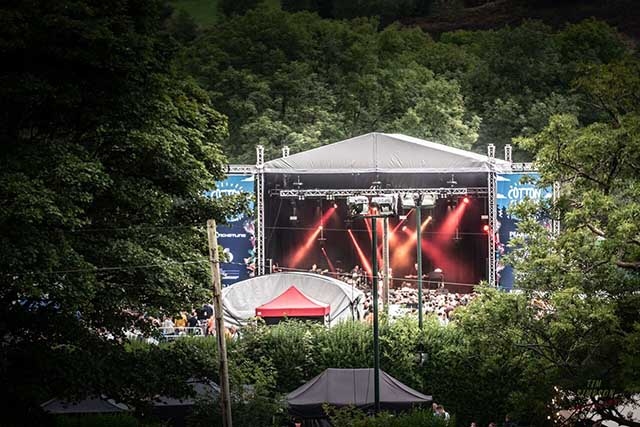 What a spectacle: The Cotton Clouds festival was a roaring success. Pictures courtesy of Tim Simpson Photography

SATURDAY: Imagine my excitement after 20-plus years of festival-going to be given the opportunity to visit an outdoor showpiece right on my doorstep.

Cotton Clouds - the brainchild of locally-based brothers Rick and Max Lees, and their mate Luke Stanley - once again boasted the beautiful Saddleworth hills as its breath-taking backdrop.

And now, after this latest overwhelming success, it is easy to see how their first festival last year was so popular and later nominated in the Best New Festival section in the UK Festival awards.

Maybe that led Rick, Max and Luke to the decision to increase this year's festival to a two-day event.

My initial impression was how well laid out and organised it was.

The usual food, drink and VIP areaa were available, while there was a central stage, with the Spinning Room Stage and Tim Peaks Diner to the left and right.

Now this is where Cotton Clouds really began to really impress me.

From experience, there are so many times when you have to make a decision on which act to watch, but on this occasion the acts on either side filled the gaps when the main stage was being set up for each new act.

I was blown away by four-piece indie band The K's, as were many more festival goers who packed into the Spinning Room to watch their half-hour set.

They were followed by Toploader, who oddly sent the crowd crazy with their rendition of Rocket Man, and of course left everyone Dancing In The Moonlight.

Starsailor were captivating as always, entertaining with old favourites including Alcoholic and Good Souls, plus a very entertaining cover of Waterfall.

The Spinning Room then became the host for an impromptu party as the crowd danced away to a fantastic set by the Allergies, who later Tweeted: "We had a blast."

That's a sentiment echoed by the whole packed tent.

Now for Sister Sledge, and I am a convert.

The Sisters - now accompanied by two sons - sent the crowd into a total disco frenzy, with massive hits including Frankie, Lost In Music and the climax everyone was waiting for - We Are Family.

There was also a moving tribute to the late Aretha Franklin.

Sadly they just seemed to be over far too soon, as did the festival.

Roll on next year and Rick, Max and Luke - thank you for the music.

FRIDAY: Also a superbly-planned effort operationally, Friday's Cotton Clouds offering got the weekend off to a flyer, despite the damp weather at tea-time.

Legendary local singer-songwriter Badly Drawn Boy was typically on form and woo'd his large band of fans with a subtle, yet perfectly-executed set, while Chali 2NA and Krafty Kuts certainly livened up any potential lingerers in the gathering gloom with their powerful rap and hip-hop.

Thankfully the clouds lifted and the rain drifted away from the Saddleworth hills by the time the Pigeon Detectives delivered their superb and lively 40-minute set, but this hack was totally looking forward to the main event - the Lightning Seeds.

Ian Broudie and the guys certainly delivered as darkness fell, belting out their array of class favourites that included Pure, Life of Riley, Sugar Coated Iceberg and Lucky You.

What a blast - though just as they opened up their last tune - unsurprisingly the World Cup football anthem Three Lions - there was stunned silence.

The band had over-run their strict 10pm curfew and it was now 10:04, so the set was pulled.

There were a few grumbles as the crowds began to disperse, but (licensing) rules are rules and thankfully the site cleared with every single attendee still buzzing with excitement.

This whole event - just like last year - was a towering triumph for live music once again.

* For the record, any over-run on a set is the band's issue.

They are made fully aware of set time curfews well in advance of any gig.