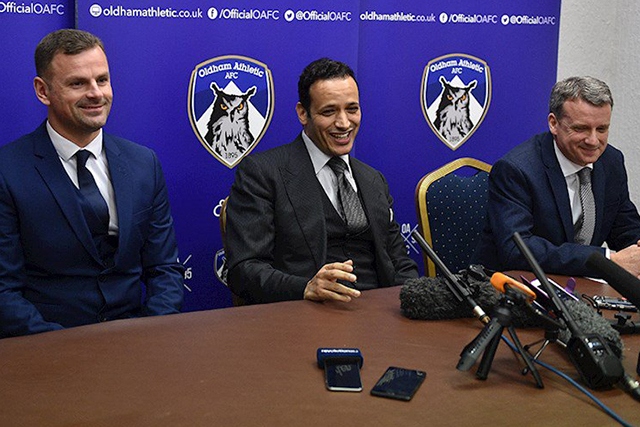 Abdallah Lemsagam (left) at his recent unveiling as Athletic's new owner. He is flanked by Richie Wellens and Mark Moisley.

He’s only been around officially at SportsDirect.com Park since January 26, but already new Athletic owner Abdallah Lemsagam is having an impact at the club.

Moroccan former football agent Lemsagam took the majority shareholding from previous chairman Simon Corney, and it seems changes could well be in the offing sooner rather than later, both on and off the pitch.

Athletic chief executive Mark Moisley has been speaking to the Chronicle about Lemsagam’s arrival and offered a brief insight into what could be in store.

Moisley said: “Abdallah’s got new ideas, it’s his club, he’s got the 97-per-cent of it so it is lock, stock and barrel effectively.

“He has been around for a few months really so we have had chance to get to know him, but it does change when he’s the owner.

“He’s the man responsible for the club, we all answer to him, and he’s clearly got his own ideas that he wants to instil.

“In the early days he’s been very clear that he wants to keep the focus on the team, given our position at the moment, but equally there is an awful lot of work to be done behind the scenes that he’ll be closely involved with over the coming months.”

It’s still unclear as to how Richie Wellens’ relationship with Lemsagam is developing in these early days, but the Athletic manager was backed with transfer funds during the January window.

The Athletic gaffer missed out on a couple more deadline-day targets, but Wellens himself has also made a significant impact since he took over from John Sheridan and again, Moisley reckons fortunes will soon turn.

The chief executive said: “Richie was a bit disappointed the day after the window closed because he’d tried to get a couple in late on, but if you look back at the month as a whole, I think the quality of players we brought in has without doubt given us a stronger squad than we had on December 31.

“It’s been a big transitional period, but hopefully we are in a stronger position moving forward.

“We did have a terrific run when he came in, but then there’s been the flip side to that – it’s been neither one thing nor the other so far.

“From day one, though, we knew he was going to give it everything. He’s the hardest working manager I’ve ever worked with, and we’ve been through seven or eight during my time here.

“He’s great around the place, he’s very enthusiastic – he does get on with all the staff and supporters.

“At the end of the day he’s still very much learning his trade, he’ll tell you that himself.

“He’s only had a relatively small number of games as a manager and he’ll learn as he goes along, but so far he’s had a mixed bag.

“He’s had a bad patch, but hopefully we’re through that and now we’ve got a run of games against teams in and around us.

“There’s some crucial games, but ones we can pick up points from.”
Moisley insists the brilliant Athletic supporters still have a major role to play in the continuing battle to avoid the dreaded drop.

“Our away support in particular is phenomenal,” said Moisley.

“Even at places like Plymouth just before Christmas, and now we’ve got a few more local games coming up like Wigan, Rochdale and Bury – we’ll take big, noisy followings to all of those.

“It’s great, and it makes a big difference to everyone.

“Of course we’d like to get a few more in at home games, but you can’t knock the atmosphere that’s created by the fans that are here.”