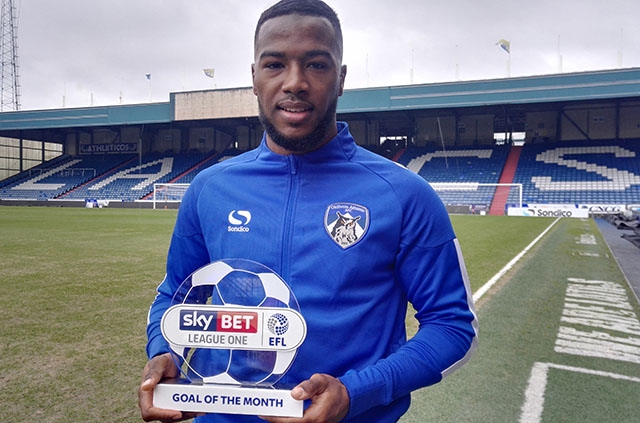 Athletic frontman Duckens Nazon reckons the club’s supporters have played a massive part in the side’s resurgence in recent weeks.

Haiti international Nazon - who is currently on loan from Wolverhampton Wanderers - feels Athletic’s loyal fanbase have helped spark the team’s current form. They are currently unbeaten in five matches.

“I think the fans in this game [the 2-2 draw with Bury last Saturday] had an important role, because when they shout us this gives us a lot of power,” said Nazon.

“To come back from 2-0 down away is very difficult but I think we’ve got a good group.

“Everyone spoke in the changing room at half-time and said ‘okay let’s go’ as 2-1 was a good score for us [to come back from] as well.”

Over 2,000 advance tickets had been sold to Oldham supporters prior to the short trip to Gigg Lane, while a significant number of additional fans paid on the day of the game - the 23-year-old admits this loyalty helped spur the players on to rescue a point.

“That’s strange [Athletic supporters being housed behind both goals] because we was playing away but it looked like we were playing at home - our fans were more than the Bury fans,” added Nazon.

“Our fans were massive, like there was 3,000 people and I think every player had in his head ‘we cannot let these 3,000 people come here for us and lose like this’.”

Former Lorient man Nazon has settled into life at Athletic with ease and believes the vociferous nature of the English game has helped make his move to the club a smooth transition.

Nazon said: “I like it [the English game] because I think it’s my type of football.

“I’m really enjoying it because the fans everywhere I’ve been have been amazing, I like the atmosphere.”

The lively forward has scored twice during his spell at SportsDirect.com Park - both goals came in the 2-2 draw with Blackburn last month - and while Nazon’s form may have attracted other clubs ahead of the next campaign, his focus lies solely on helping Athletic stay clear of the drop zone.

Nazon continued: “I don’t know if it’s a good situation or not for Wolves, for me they’re going to go into the Prem [Premier League] - because they’re first.

“That’s why I’m just trying my best here, giving my maximum and seeing what happens at the end of the season -  then I’ll take the best opportunity for me.”

Meanwhile, Nazon's first strike in the 2-2 draw at Ewood Park has won the Sky Bet League One Goal of the Month award for February, just edging out fellow Athletic nominee Cameron Dummigan.

Check out or video containing thoughts from Nazon and recall the brilliant strike itself.