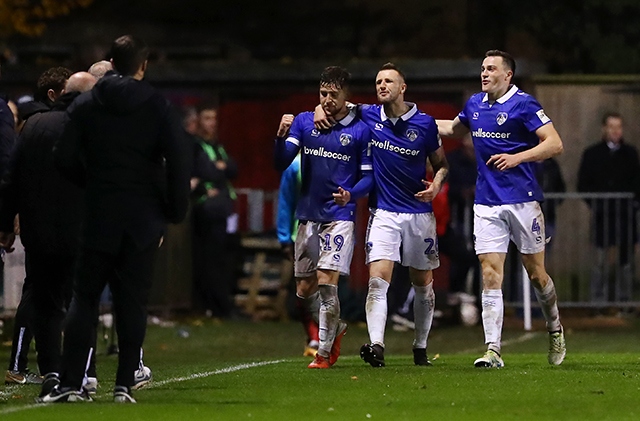 Get in: Athletic players celebrate their last-gasp victory

A goal behind with just two minutes left on the clock, Frankie Bunn's gutsy side eventually sealed another potentially tricky second round trip to Maidstone United in just less than three weeks time.

Rob Hunt equalised in the 88th minute at the Jezzards Beveree Stadium, before Callum Lang pounced to score the decisive goal in the fifth minute of added time to break Borough's hearts.

The hosts looked on course for a famous victory after Chris Dickson's first-half penalty.

It had looked set to be a frustrating evening for the visitors, who fell behind after referee Tom Nield controversially penalised Lang for a challenge on Tyrell Miller-Rodney.

Replays suggested contact was minimal, but former Charlton and Ghana forward Dickson put the Beavers ahead as they sought their first victory at this stage of the competition after defeats by Barnet in 2000 and Dagenham in 2007.

Dickson, who scored in the Europa League for AEL Limassol against Marseille in 2012, went close to adding a second, as did Zak Joseph.

But that would have been harsh on Athletic, who had 24 shots during the game.

But Athletic kept going forward, and Hunt converted from close range after a speedy counter-attack.

Lang then got on to Chris O'Grady's flick-on to volley home from 12 yards as the Boundary Park outfit secured a 23rd victory in their past 24 FA Cup first-round ties against non-league opponents.